TEHRAN, August 29 - Commander of the Iran’s Islamic Revolution Guards Corps (IRGC) Aerospace Force said all war threats of enemies shattered as the US spy drone was downed by IRGC forces. 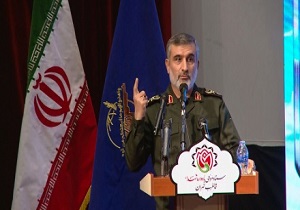 He referred to the friendly countries’ intelligence services warning about enemies’ military threats against Iran, saying that The Islamic Republic was mindful that it was a trick to force Tehran to the negotiating table.

The specter of war was removed when the IRGC shot down the American RQ-4 Global Hawk, General Hajizadeh remarked.

“We were confident that if they (enemies) had made the first mistake, we would have attacked their bases and stations around us,” the IRGC top commander added.

In comments on Wednesday, Chief of Staff of the Iranian Armed Forces Major General Mohammad Hossein Baqeri said Iran’s deterrence power has reached such a high level that the US refrained from taking any action after Iran shot down the spy drone.

On June 20, the Islamic Revolution Guards Corps (IRGC) shot down a US spy drone that had violated the Iranian territorial airspace near the Kooh-e-Mobarak region in the southern province of Hormozgan.