TEHRAN, August 31 - European Union foreign policy chief Federica Mogherini says the 28-nation bloc will continue working to preserve a nuclear deal signed between Iran and world powers in 2015 but will welcome any progress beyond it. 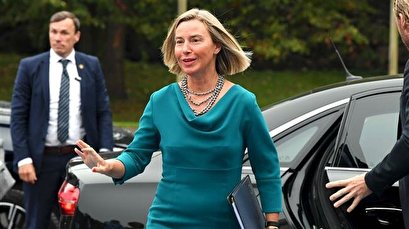 TEHRAN,Young Journalists Club(YJC) -Speaking to reporters during a meeting of EU foreign ministers in the Finnish capital of Helsinki on Friday, Mogherini added that she is playing a role to "preserve the full implementation of the existing agreements," including the historic nuclear accord, officially known as the Joint Comprehensive Plan of Action (JCPOA).

"Again if something else can be built on it [JCPOA], this would be welcomed and accompanied by the European Union," the EU foreign policy chief said.

The multilateral nuclear deal has been in jeopardy since US President Donald Trump pulled his country out of the JCPOA in May last year and stepped up sanctions on the Islamic Republic.

Under the deal, signed between Iran and the five permanent members of the United Nations Security Council – the United States, France, Britain, Russia and China – plus Germany, Tehran undertook to put limits on its nuclear program in exchange for the removal of nuclear-related sanctions.

Mogherini also said that the existing nuclear deal must not be sacrificed as part of any measure taken by Washington to forge a new security agreement with Tehran.

Tensions between Iran and the US increased after Washington's unilateral withdrawal from the multilateral deal. Trump has since been following what he calls a campaign of “maximum pressure” on the Islamic Republic.

Speaking to Malaysia's official news agency Bernama, Iran's Foreign Minister Mohammad Javad Zarif said the country will not renegotiate the nuclear deal but is open to talks on finding ways to implement the existing accord.

The top Iranian diplomat's remarks came after Mogherini said on Thursday that the EU welcomes any talks between Iran and the US, emphasizing, however, that the 2015 nuclear deal enshrined in a United Nations Security Council resolution should be preserved.

Europe to step up diplomatic efforts to save JCPOA: Germany

The foreign ministers of the three European signatories to the JCPOA were joined by EU's Mogherini for talks on the sidelines of the bloc's meeting in Helsinki.

Speaking to reporters after talks with the British foreign secretary and the French foreign minister, Maas said the trio wanted to build on momentum from last weekend's summit of the world’s seven top economic powers, known as the G7, in the French resort city of Biarritz, where Trump indicated willingness to talk to Iran.

"Our priority is to open the dialogue window between the US and Iran," the top German diplomat said.

"Especially after the G7 summit in Biarritz, we are all of the opinion that the momentum that perhaps exists, the readiness for dialogue on both sides... must now be used."

In a joint press conference with French President Emmanuel Macron at the conclusion of the G7 summit on Monday, Trump said that he is ready to meet with his Iranian counterpart in the next few weeks.

"If the circumstances were correct, I would certainly agree to that," the US president said.

The French president said he hopes a long-anticipated meeting between the presidents of Iran and the United States would take place "in the next few weeks."

Later on Tuesday, President Rouhani said the United States should lift all its “cruel” and “unlawful” sanctions against Iran and begin respecting the nation’s rights as a “first step” towards dialog, emphasizing that the Islamic Republic will not engage in any negotiations for the mere sake of photo opportunities.

The Europeans have repeatedly announced that they remain committed to implementing the JCPOA, but efforts to shield Iran's economy from the re-imposition of US sanctions have so far borne little fruit.

Maas also said on Friday, "We will be discussing further diplomatic efforts together with the French and the British -- including in the region with all the countries bordering the [Persian] Gulf."

He noted that there were sill "different views" but nothing should be done that might imperil diplomatic efforts.

Britain wants to build on momentum of positive G7 talks

British Foreign Secretary Dominic Raab said his country wanted to "build on the momentum of the positive G7 talks on Iran."

"The nuclear deal is the only deal on the table that prevents Iran from getting a nuclear weapon and we will continue working together to encourage Iran to uphold the agreement in full," Raab said.

Japanese Prime Minister Shinzo Abe said on Friday that he would carry out every possible measure to ease tension in the Middle East.

He added that he wants to talk with Iran's President Rouhani on the sidelines of the 74th United Nations General Assembly session that starts in September.

"Peace and stability in the Middle East directly links to Japan's national interest," Abe told a news conference at the end of a three-day international conference on African development.

"I visited Iran in June. I would like to work tenaciously, and play the best possible role to ease tensions in the Middle East," the Japanese prime minister added.

Speaking at a joint press conference with President Rouhani in Tehran in June, Abe said his country aims to play a role in easing tensions surrounding Iran, highlighting the significance of peace and tranquility in the Middle East.

Japanese Foreign Minister Taro Kono also said on Tuesday that his country is concerned about ongoing tensions in the Middle East and is ready to make diplomatic efforts to help settle the issues.