TEHRAN, August 31 -The two major sections of NASA’s James Webb Space Telescope have been connected to each other for the first time, a milestone in the spacecraft’s assembly ahead of a 2021 launch. 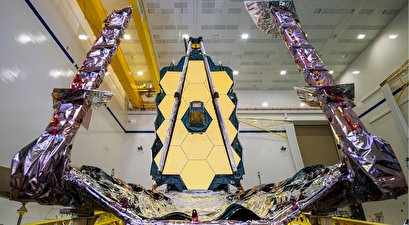 TEHRAN,Young Journalists Club(YJC) -In an Aug. 28 statement, NASA said engineers at a Northrop Grumman facility in California mated the observatory’s telescope element, which includes its mirrors and instruments, with the spacecraft bus and sunshield. The two sections are mechanically connected, with engineers now working on electrical links.

The two sections of the spacecraft had been assembled and tested separately throughout the mission’s extended development process up until now. The telescope element, formally known as the Optical Telescope Element/Integrated Science Instrument Module, or OTIS, was assembled at NASA’s Goddard Space Flight Center and underwent thermal vacuum testing at the Johnson Space Center before arriving in California in early 2018. The spacecraft element was built at Northrop Grumman and recently completed its own environmental tests.

“This is an exciting time to now see all Webb’s parts finally joined together into a single observatory for the very first time,” Greg Robinson, JWST program director at NASA Headquarters, said in a statement. “The engineering team has accomplished a huge step forward and soon we will be able to see incredible new views of our amazing universe.”

“Soon,” though, is a relative term. Even after the combined spacecraft is fully connected, it will undergo additional testing, including deployments of its sunshield and acoustic and vibration environmental testing, which is expected to take place next year.

NASA has been working to a launch of JWST on an Ariane 5 in March 2021. However, earlier this year, members of an independent review board who evaluated previous problems with the telescope that pushed its launch back from the fall of 2018, warned that the project appeared to be using schedule reserve at a higher rate than expected, casting doubt on the ability of the mission to remain on that new schedule.

The agency hasn’t provided a recent update on JWST schedules, although timelines presented at a March meeting projected integrating the two elements of JWST by mid-September. Both NASA and Northrop Grumman, in separate statements, listed a JWST launch date of only 2021.

“This milestone marks a major achievement for all of us at Northrop Grumman and NASA,” Scott Willoughby, vice president and program manager for JWST at Northrop Grumman, said in a company statement. “Seeing the full observatory for the first time further reinforces our commitment to mission success. There is still more work to be done, but it is a great feeling seeing something that was once a concept, become reality.”