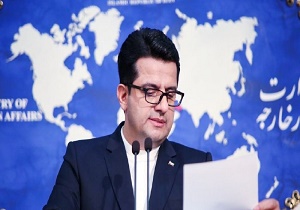 TEHRAN, Young Journalists Club (YJC) - Seyyed Abbas Mousavi said Zarif wrote in his letter to Mogherini that due to the consequences of the US withdrawal from the 2015 nuclear deal and the imposition of its sanctions against Iranian nation and the inability of the three European countries in fulfilling their obligations under the agreement and commitments they made in the Joint Commission, the Islamic Republic of Iran has stopped all its obligations in the field of nuclear research and development.

"The letter emphasized that the measure is in strict accordance with Iran's rights in the 2015 nuclear deal, also known as the Joint Comprehensive Plan of Action JCPOA, in particular its paragraph 4, and was made in response to widespread and continued violations of the JCPOA over the past six months," Mousavi added. "The technical and operational details of Iran's measure will subsequently be communicated to the International Atomic Energy Agency."

According to the spokesman, Zarif also emphasized that the Islamic Republic is ready to continue talks with the remaining parties in the deal at all levels in order to demonstrate its goodwill, and if the other parties act to all of their commitments in the JCPOA, Tehran is ready to return to all its obligations.