TEHRAN, Sept 13 - Iran's ambassador and permanent representative to the UN's European office in Geneva said the negative effects of sanctions and unilateral coercive measures on people’s enjoyment of basic human rights are considered as crimes against humanity. 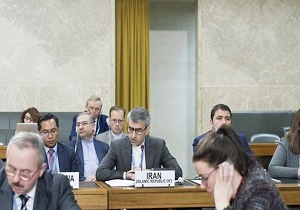 He addressed those naming themselves as master of sanctions and said that they should be regarded as human rights violators and killers of patients and children.

Calling on countries to take legal measures in order for neutralizing the effects of sanctions, Baghaiee Hamaneh recalled the international community's consensus to oppose and resist the extraterritorial implementation of illegal sanctions, and called for taking practical measures against sanctions.

Yet, the Iranian envoy criticized the UN High Commissioner for disregarding the negative effects of sanctions on people’s enjoyment of basic human rights.

The meeting of on the impact of unilateral coercive measures on the enjoyment of human rights is one of the most important initiatives of the Human Rights Council held every two years.