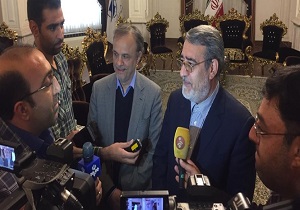 TEHRAN, Young Journalists Club (YJC) - Abdolreza Rahmani Fazli said that based on the trade agreement, a 300-categorie of discounted and promotional basic goods are exported from Iran to the EAEU member states, and a 500-categorie of commodities also will be imported to Iran from the member countries of the EAEU.

Abdolreza Rahmani Fazli made the remarks in a press conference at Mashhad, the capital of Iranian province of Khorasan Razavi, on Saturday, after he returned from his trip to Kyrgyzstan.

Noting the $44-million value of the trades between the two countries, Rahmani Fazli predicted that the amount will at least be doubled in the coming two years.

The Eurasian Economic Union (EAEU) and Iran signed on May 17, 2018, an interim agreement on the Free Trade Area. The agreement significantly enhances trade between the EAEU countries, including facilitating the customs regime.

The Eurasian Economic Union, including Russia, Belarus, Kazakhstan, Armenia and Kyrgyzstan, began its work in 2015.