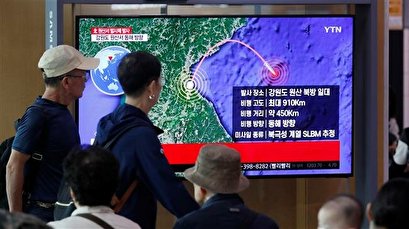 The missile, likely a Pukguksong-class weapon, flew 450 kilometers and reached an altitude of 910 kilometers, it explained.

The National Security Council in the South’s capital, Seoul, believes the projectile might have been a nuclear-capable SLBM, according to a statement issued by the presidential Blue House.

Japan’s chief cabinet secretary, Yoshihide Suga, initially said that Pyongyang had fired two missiles. One, he said, landed inside and the other outside Japan’s EEZ.

“At present, there are no reports of damage to shipping or aircraft in nearby airspace,” Suga said of the impact from the second missile.

‘Maybe it was just one’

Later in the day, however, Suga said Pyongyang might have launched just one missile.

“At the moment, it seems that one missile was launched and that split into two and fell. We are conducting analysis for details,” he said.

Japanese Prime Minister Shinzo Abe reacted to the launch by saying it was a violation of United Nations Security Council resolutions.

The North has not yet made a statement on the reported launch.

Pyongyang had been developing SLBM technology before it suspended long-range missile and nuclear tests last year.

This is the ninth time Pyongyang has tested ballistic missiles or other projectiles since late July.

North Korea, currently under multiple rounds of harsh sanctions by the UN and the United States over its nuclear and missile programs, put a unilateral halt to its missile and nuclear tests shortly before a diplomatic thaw began between Pyongyang and Seoul in early 2018.

But diplomacy snagged as the US refused to reciprocate unilateral North Korean steps. And later, Kim indicated that his country would resume its nuclear and missile tests.

Pyongyang agrees to resume talks with US

The Wednesday test-fire came just a day after Pyongyang announced it had agreed to resume talks with the US this week.

The two sides will have “preliminary contact” on Friday and working-level negotiations the following day, according to the North’s First Vice Foreign Minister Choe Son-hui.

The US State Department also confirmed the two sides planned to “meet within the next week.”