100s rally in Hong Kong over police shooting of protester

TEHRAN, oct 2_Hundreds of protesters in Hong Kong have held a demonstration outside the school of an 18-year-old school student who was earlier shot in the chest by police. 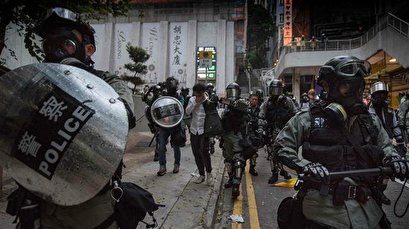 The shooting, which occurred on Tuesday, as China marked its 70th founding anniversary, marked the first time that a demonstrator was struck with live rounds in nearly four months since the onset of demonstrations that plunged the semi-autonomous Chinese city into chaos.

Hong Kong police said the officer feared for his life when he unloaded the weapon, hitting the young man, who was among a group that attacked officers with poles and umbrellas.

Authorities say the wounded protester is now in a stable condition.

The Tuesday rallies turned violent as protesters threw rocks and petrol bombs at riot police, who responded for the most part with tear gas canisters and by shooting rubber bullets and water cannon in an attempt to break up the crowds.

According to medical authorities, more than 100 people were injured during the Tuesday riots. Police made more than 180 arrests throughout the day.

On Wednesday, Hong Kong residents woke up to a trail of violence and destruction left from the protests a day earlier.

Some metro lines of the MTR Corporation were running slower than normal on Wednesday as workers tried to repair damage.

Anti-China graffiti was sprayed on the walls of buildings associated with mainland China, as well.

Since June, Hong Kong has been beset by unrest over a contentious extradition bill that would have allowed the extradition of suspects to mainland courts for trial. The bill has since been fully withdrawn, but the protests have continued.

The government of the semi-autonomous Chinese region has also opened talks with protesters.

China has accused foreign governments, including the United States and Britain in particular, of provoking unrest in Hong Kong. The two countries have been voicing support for the protesters.