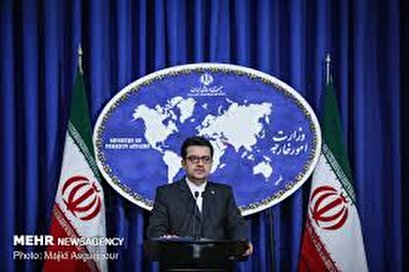 TEHRAN, Young Journalists Club(YJC)_The spokesman for the Iranian Foreign Ministry called on Germany to end support for the criminal regime of Israel and to live up to existing expectations of an effective and constructive role in helping to create lasting peace and stability in the region.

The Islamic Republic of Iran considers reducing tension in the region to be possible only through serious confrontation of all parties with destructive, meddlesome and inhumane actions of the Zionist regime [of Isreal,]" Mousavi said.

The Iranian FM spokesman was referring to the devastating crimes of the Zionist regime in Palestine, Lebanon, and Syria.

Mousavi further noted that the Islamic Republic of Iran will continue to support the oppressed nations of the region, including the Palestinian people, based on its adherence to human and Islamic values.

In a statement, the German Foreign Office spokesman underscored his country's support for the Zionist regime of Israel and called on Iran to be committed to maintaining peaceful relations with the countries of the region and taking practical steps to ease the tensions.