TEHRAN, oct 3_Barcelona have come from behind to beat Inter Milan 2-1, thanks to a Luis Suarez double at Camp Nou. 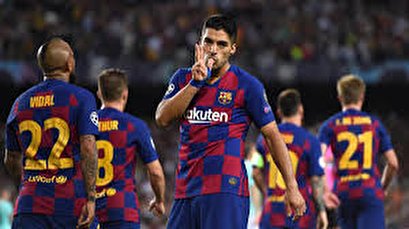 TEHRAN, Young Journalists Club(YJC)_Argentine forward Lautaro Martinez fired Inter ahead after just two minutes, in the Group F encounter. But Suarez broke down the visitors with a stunning volley just before the hour mark.

Suarez then finished off Lionel Messi’s weaving run in the 84th minute to complete the turnaround. The result takes Barca second in the group with four points after two games while Inter are third with one.

Meanwhile, Zenit St Petersburg stayed on course to reach the Champions League knockout stages after a 3-1 home win over Benfica in Group G. Artem Dzyuba put Zenit in front in the 22nd minute with a clinical finish from 12 meters.

The hosts doubled their lead in the 70th minute when Ruben Diaz diverted a Vyacheslav Karavayev effort into his own net. Iranian striker Sardar Azmoun then made it 3-0 with a deft finish inside the penalty area after a break by the home side.

The result put Zenit top of the standings on four points from two games, while Benfica are bottom of the table after two losses.