TEHRAN, oct 3_North Korea says it has successfully test-fired a new submarine-launched ballistic missile (SLBM) from sea ahead of fresh nuclear talks with the United States. 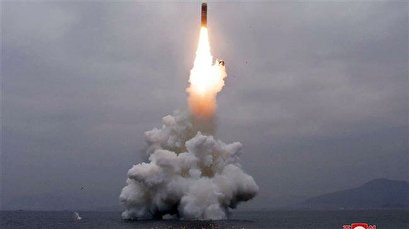 TEHRAN, Young Journalists Club(YJC)_The state news agency KCNA said the North Korean leader Kim Jong Un was not present at the site of the Wednesday launch, but "sent warm congratulations" to the defense scientists who conducted the test.

The report said the new type of SLBM called Pukguksong-3 was "fired in vertical mode" in the waters off the eastern city of Wonsan.

South Korea's military had earlier declared that Pyongyang has fired a projectile, most likely a submarine-launched ballistic missile, which landed in waters near Japan’s Exclusive Economic Zone (EEZ).

"The successful new-type SLBM test-firing comes to be of great significance as it ushered in a new phase in containing the outside forces' threat to the DPRK and further bolstering its military muscle for self-defense," the report by KCNA said.

The official news agency claimed the test "had no adverse impact on the security of neighboring countries.”

South Korean Defense Minister Jeong Kyeong-doo says the Pukguksong, or Pole Star in Korean, would have had a range of about 1,300 km (910 miles) on a standard trajectory.

The Wednesday test-fire came just a day after Pyongyang announced it had agreed to resume talks with the US this week. The two sides will have “preliminary contact” on Friday and working-level negotiations the following day, according to the North’s First Vice Foreign Minister Choe Son-hui.

The US State Department also confirmed the two sides planned to “meet within the next week.”

In reaction to the Wednesday launch, a US State Department spokeswoman called on Pyongyang to "refrain from provocations" and to remain committed to the nuclear negotiations, which are to resume in coming days.

North Korea had been developing SLBM technology before it suspended long-range missile and nuclear tests and began talks with the United States that led to the first summit between Kim and Trump in Singapore in June 2018.