TEHRAN, oct 3_Washington Post owner Jeff Bezos, Hatice Cengiz, the fiancée of the murdered Saudi journalist Jamal Khashoggi, and dozens of activists have attended a justice-demanding vigil near Saudi Arabia’s consulate in the Turkish city of Istanbul on the first anniversary of Khashoggi’s gruesome murder, which is believed to have taken place on Saudi Crown Prince Mohammed bin Salman’s direct order. 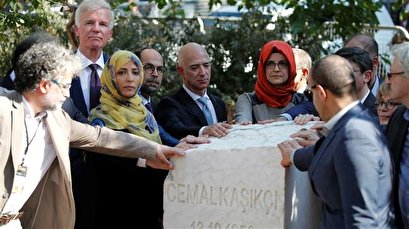 TEHRAN, Young Journalists Club(YJC)_The vigil was held outside the Saudi consulate in Istanbul on Wednesday, a full year after 59-year-old Khashoggi, a former advocate of the Saudi royal court who later became a critic of bin Salman, was killed after being lured into the diplomatic mission on October 2, 2018.

In the beginning of the protest event, Cengiz unveiled a stone memorial to her murdered fiancé directly in front of the Saudi consulate, bearing the Turkish inscription of his name.

“After the worst year of my life, I stand here broken but proud. I still seek justice. I want to know what happened to his body. I want his friends to be released from jail. I want those in power to be held accountable for their actions,” she said, addressing an audience of dozens heavily guarded by Turkish police and military personnel.

The vigil began just after 1:14 p.m. local time (1014 GMT), the time that the Washington Post columnist entered the consulate on the same day last year to collect documents required for him to marry Cengiz, who was waiting for him outside. He never came out, and Saudi Arabia has not produced his body.

The attendees, mostly human rights and media freedom activists, called for a United Nations-led investigation into the murder and action to ensure that the perpetrators of the murder did not go unpunished.

UN official: Saudi Arabia should not be allowed to get away with murder

The Washington Post, for which Khashoggi was a columnist, reported in November last year that the CIA had concluded that the Saudi crown prince ordered his killing. Washington has yet refused to formally implicate Mohammed, however.

The UN Special Rapporteur on extrajudicial killings, Agnes Callamard, was also present at the vigil and said in a speech at the memorial service that the world had to insist that “no one, not even a powerful and influential state as Saudi Arabia get away with murder.”

In a report released earlier this year, Callamard asserted that Riyadh bore responsibility for the murder, which was described by her in the report as a “deliberate” and “premeditated execution.” She also insisted that there was “credible evidence” linking Mohammed to the murder and an attempted cover-up.

“We gather here together to hold our light high, our light is our demand for justice, and that will not be dimmed,” she said at the Wednesday memorial. “Impunity’s darkness must not win... lest we all fall under its toxic shadow.”

Bezos, who is also the founder of Amazon, tried to soothe Cengiz after he made an unannounced appearance at the memorial.

“No one should ever have to endure what you did. You need to know that you are in our hearts. We are here and you are not alone,” he told Khashoggi’s Turkish fiancée.

The Saudi government says it is trying 11 people for the killings, but the slow and secretive process of the trials has been under fire by activists and rights groups, who say they utterly lack in credibility. Furthermore, Saud al-Qahtani, Mohammed’s former top aide and one of the alleged architects of the gruesome murder, has not been charged and has vanished.

In a statement on Wednesday, Amnesty International condemned the way the trials were being held, demanding the Saudi authorities to immediately allow independent monitors into the trials.