TEHRAN, oct 4_ The intelligence unit of Iran’s Islamic Revolution Guards Corps (IRGC) has thwarted an Arab-Israeli plot to assassinate Major General Qassem Soleimani, a globally famous defense strategist who played a key role in the counter-terrorism operations that led to the collapse of the Daesh terror group in Iraq and Syria. 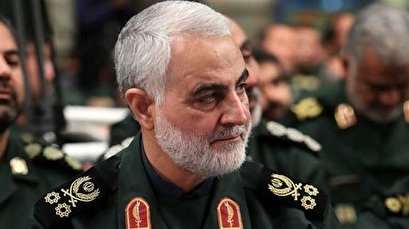 TEHRAN, Young Journalists Club(YJC)_Hossein Taeb, the head of the IRGC’s intelligence unit, said on Thursday that plot — hatched by Hebrew-Arab intelligence services — would see a team of terrorist recruits enter Iran to pave the way for a bomb attack targeting Soleimani, who commands the IRGC’s Quds Force, in the country’s southeastern province of Kerman.

According to Taeb, the terrorists were supposed to buy a place next to a Husseiniyah (religious hall) belonging to General Soleimani’s late father, plant 350-500 kilograms of explosives beneath the place, and blow up the site during Tasu’a and Ashura mourning processions marking the martyrdom anniversary of Imam Hussein (PBUH), the third Shia Imam, on September 8-9.

The plotters were, however, under watch since they transferred the terrorist cell’s members to a neighboring state for high-cost training programs before carrying out the terror plot, the IRGC official said.

Following a “precise and smart intelligence operation,” the IRGC’s intelligence unit “succeeded in arresting the three-member team,” he said, adding that the “Hebrew-Arab services” had spent several years to draw up the plot for such crime.

“Through this ominous act, they were after igniting a religious conflict and portray it (assassination) as a domestic revenge case; however, with God’s blessing, despite several years of planning, they encountered the barrier of diligence and vigilance of the Iranian nation’s children and were trapped by the IRGC’s intelligence unit before [being able to] carry out the plot,” he added.

He also pointed out that members of the team had confessed after their arrests that they had wanted “something big” to disrupt the internal order and public opinion.

Major General Soleimani successfully led Iranian military advisers backing the national armies of Syria and Iraq in their fight against terror groups, many of which had the backing of the Israeli regime and certain Persian Gulf Arab regimes.

General Soleimani was present on the ground to supervise the decisive stages of Iran-backed operations against Daesh, which lost in late 2017 all the territories it had seized in Iraq and Syria.

Earlier this week, the senior IRGC commander gave an interview to the website of Leader of the Islamic Revolution Ayatollah Seyyed Ali Khamenei, during which he gave an insight to his key role during Israel’s 33-War on Lebanon in 2006.

According to a 629-page Winograd Report by the Israeli regime itself, Hezbollah resistance fighters involved in defending Lebanon against the Israeli war alongside the national army defeated the enemy and Tel Aviv was compelled to withdraw without having achieved any of its objectives.