TEHRAN, oct 4_ The US State Department has approved the possible sale of anti-tank missiles to Ukraine; a sale that was discussed during an uncovered phone conversation between President Donald Trump and his Ukrainian counterpart in July. 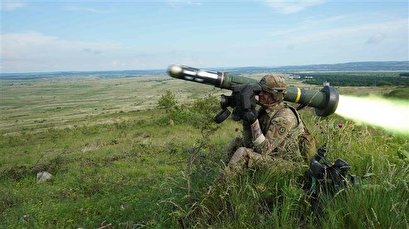 “This proposed sale will contribute to the foreign policy and national security of the United States by improving the security of Ukraine,” it said in a release.

“The Javelin system will help Ukraine build its long-term defense capacity to defend its sovereignty and territorial integrity in order to meet its national defense requirements,” it added.

The Pentagon also notified Congress of the possible sale on Thursday.

Kiev ordered the purchase of the weapons three weeks before the phone call in question, but the sale was discussed between Trump and his Ukrainian counterpart, Volodymyr Zelenskiy, during a telephone conversation in July, which is now threatening to bog down the Trump administration.

Trump stands accused of asking Zelensky eight times during the phone call to work with his lawyer Rudy Giuliani to investigate government corruption involving the former United States Vice President and current front-runner for the 2020 Democratic presidential nomination, Joe Biden, and his son.

The president and his administration have been accused by the Democrats of blocking investigation into the case. Trump said in a Tweet on Tuesday that what “is taking place is not an impeachment, it is a COUP.”

Meanwhile, in a five-page memorandum of the call that was released last week, Zelensky said that his country was “almost ready to buy more Javelins from the United States for defense purposes.”

Trump in response asked for “a favor though because our country has been through a lot and Ukraine knows a lot about it.”

“I would like you to find out what happened with this whole situation with Ukraine,” Trump said, apparently referring to the origins of special counsel Robert Mueller’s probe into the alleged Russian meddling in the 2016 US presidential election.

In another part of the call, Trump asked Zelensky if he could “look into” unsubstantiated allegations of wrongdoing against Biden and his son Hunter, who previously had a seat on the board of a Ukrainian natural-gas company.

The recent sale is separate from the $250 million in military aid that was authorized months earlier by Congress.

The aid was withheld by Trump without a clear explanation until almost two months after his call with Zelensky.

Democrats on Friday demanded answers on what prompted the president to place a hold on the military aid.

The package of weapons is now at the center of the impeachment inquiry into whether Trump withheld the money and weapons in a bid to gain political advantage over Biden this summer.