TEHRAN, oct 4_ Most parents know that sacrificing sleep is part of raising a young child. The same goes for bees. 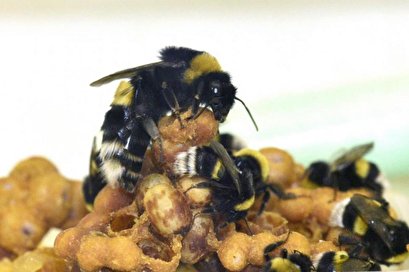 TEHRAN, Young Journalists Club(YJC)_New research suggests brood-tending bumble bee workers sleep much less than other bees, even forgoing sleep to care for offspring that is not their own. But unlike other animals, bees seem to do just fine without the normal amount of sleep.

Most studies of sleep behavior have focused on humans and other model organisms in the lab, but the latest research -- published this week in the journal Current Biology -- suggests their is value in studying sleep in diverse species.

"Our findings show that sleep is more plastic and less rigid than is commonly accepted," study co-author Guy Bloch of Hebrew University said in a news release.

Tests show that when humans, rodents and flies are sleep deprived, their health and performance suffers. But while bee sleep looks a lot like the sleep of other animals, the latest research suggests there are ways to avoid the physiological costs of sleep deprivation.

Scientists determined chemical compounds released by the pupae trigger changes in the sleep patterns of worker bees. The affected bees, dubbed "nurse" bees, tend to the needs of pupae around the clock, forgoing sleep even when the offspring don't need to be fed.

Their response times were unaffected, and the bees continued to sleep less than usual. The surprise discovery suggests bees aren't affected by a lack of sleep in the same way.

"The fact that the nursing bees sleep so little, even when caring for pupae that do not need to be fed was the most surprising," first author Moshe Nagari said. "Before this study, we assumed that the main functions of activity around the clock without circadian rhythms in nurse bees is to provide improved feeding to the developing larvae, enabling them to grow rapidly."

Previous studies have shown birds sleep less during seasonal migrations. Male birds and fruit flies have also forgone sleep during mating season. The latest study suggests sleep patterns are similarly flexible for bees, and that some species can sacrifice sleep without suffering a decline in performance.

"If there is no cost for sleep loss, it means that the brood-tending bees have mechanisms allowing them to significantly reduce sleep without a cost to the brain and other tissue," said Bloch. "This of courses raises the question about what exactly are these mechanisms and what is the basic function of sleep."