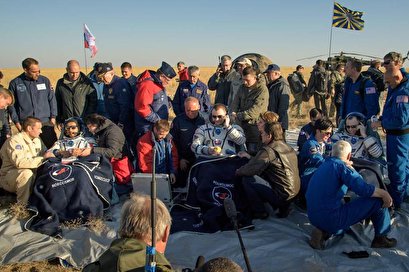 TEHRAN, Young Journalists Club(YJC)_Almansoori is the first and only person from United Arab Emirates to travel in space.

Ovchinin served as commander of the vehicle, while landed safely at 6:59 a.m. EDT in Kazakhstan, according to a news release from NASA.

While Almansoori spent just more than a week in space, the departure of Hague and Ovchinin from the space station marked the end of a 203-day mission.

NASA astronaut Christina Koch traveled to the space station with Hague and Ovchinin in March, but she will stay aboard until February 2020.

"Koch remains aboard the orbiting laboratory for an extended mission that will provide researchers the opportunity to observe effects of long-duration spaceflight on a woman in preparation for human missions to the Moon and Mars," according to NASA.

During their time inside the space station, Hague and Ovchinin conducted dozens of science experiments in the fields of biology, biotechnology, physical science and Earth science.

The duo tested free-flying robots, as well as devices designed to replicate the structure and function of human organs. Hague and Ovchinin also used a an instrument to measure the distribution of CO2 in Earth's atmosphere.

The Expedition 61 will continue to carry out dozens of science experiments, as well as make repairs and upgrades to the space station.