TEHRAN, oct 5_ Grand Ayatollah Ali al-Sistani, the top Shia cleric of Iraq, has urged security forces and protesters to avoid violence, expressing sorrow over some sporadic unrest that has led to several casualties. 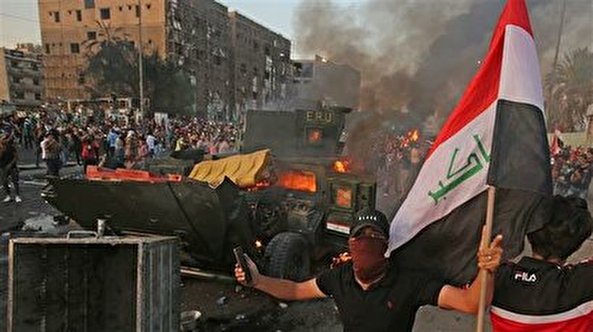 TEHRAN, Young Journalists Club(YJC)_“It is sorrowful there have been so many deaths, casualties and destruction” from clashes between anti-government protesters and security forces in recent days, Ayatollah Sistani said in a letter Friday.

In the letter read out by his representative Ahmed al-Safi during a sermon in the holy city of Karbala, the top cleric urged all parties to avoid violence.

“Lawmakers hold the biggest responsibility for what is happening,” Ayatollah Sistani was quoted as saying.

Iraqi Prime Minister Adil Abdul-Mahdi on Thursday expressed regret that the ongoing protests have become violent, saying he is ready to meet with representatives of the protesters to discuss their demands.

Speaking on Thursday night, the Iraqi prime minister said certain elements have been able to derail the protests from their peaceful path.

He said there was no "magic solution" to issues such as graft, unemployment and corruption but he would begin passing a law for basic income to be meted out to poor families.

During the televised address, Abdul-Mahdi also asked the parliament, where his coalition is in majority, to give him support so that he can reshuffle his cabinet to address people's demands.

The unrest comes as millions of pilgrims are preparing to travel to the Iraqi holy cities of Najaf and Karbala to attend Arba'een marking the fortieth day after the martyrdom of their third Imam, Hussein ibn Ali (AS).

On Friday, a senior Iranian cleric said the United States and Israel are stoking unrest in Iraq to disrupt the Arba'een pilgrimage.

"The enemy is now determined against the Islamic nation. America and Zionism ... are targeting Arba'een and Iraq, and causing trouble because it is hard for them to accept the presence of millions (of pilgrims) in Karbala," Ayatollah Mohammad Emami-Kashani said in a sermon in Tehran.

Iran’s Foreign Ministry on Thursday urged all pilgrims from the country to postpone their visit to Iraq until calm is restored.

“Stressing the importance of the great march of Arba’een and the necessity of holding this magnificent congregation, the Foreign Ministry calls on the Iranian faithful ... to postpone their visit to Iraq until calm is restored to the country, and to pay close attention to the warnings of political and security officials,” the statement said.

Iran, it said, is confident the Iraqi government and nation will work with all groups, parties and personalities, especially the top clerics and other religious authorities and political leaders to calm the current tense situation.

“The Ministry of Foreign Affairs is confident that the Iraqi nation and government will not allow the continuation of certain moves that are to the detriment of the Iraqi people and will not let the foreigners take advantage of the situation,” the statement added.