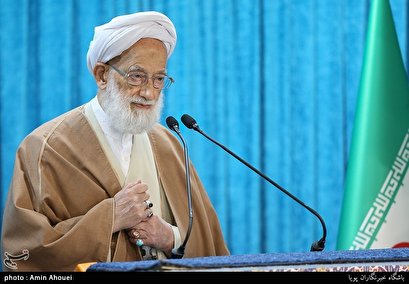 TEHRAN, Young Journalists Club(YJC)_"The enemy is targeting Arbaeen (pilgrimage) and Iraq and causing trouble because it is hard for them to accept the presence of millions (of pilgrims) in Karbala,” Ayatollah Emami Kashani said, addressing a gathering of worshippers in Tehran on Friday.

“The enemy does not want the flag of Imam Hussein (AS) to be raised,” he said, adding, “The flag of Hussein is the flag of the fight against oppression.”

The cleric further expressed the hope that this year, more Muslims would go on pilgrimage to the shrine of Imam Hussein (AS) and take part in the Arbaeen marches.

The remarks came after the Iranian Foreign Ministry, in a statement on Thursday, expressed sorrow over the sporadic unrest that has broken out in a number of Iraqi cities in recent days.

The death toll from days of violent demonstrations across Iraq surged to 44 on Friday.

In August, Iran and Iraq signed an agreement in Tehran to reopen the Khosravi border crossing and remove visa restrictions for Iranian Arbaeen pilgrims.

Iran and Iraq also agreed to raise the level of services and facilities for the pilgrims and enhance border security during the Arbaeen season, which will culminate in a large gathering in Karbala on October 19.