TEHRAN, oct 7_Leader of the Islamic Revolution Ayatollah Seyyed Ali Khamenei has said that the Iranian and Iraqi nations are connected through faith and that an enemy plot seeking to sow discord between the two will fail. 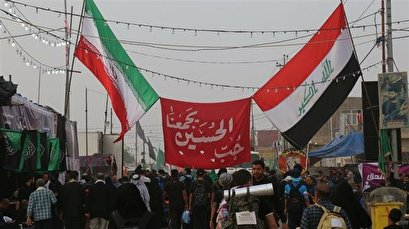 TEHRAN, Young Journalists Club(YJC)_"Iran and Iraq are two nations whose hearts & souls are tied together through faith in God, love for Imam Hussein and the progeny of the Prophet (PBUH). This bond will grow stronger day by day," the Leader's official Twitter account cited Ayatollah Khamenei as saying on Sunday.

"Enemies seek to sow discord but they’ve failed and their conspiracy won’t be effective," the tweet added.

The Leader's remarks comes as millions of pilgrims from Iraq, Iran and around the world are preparing to travel to the holy Iraqi cities of Najaf and Karbala to attend Arba'een, marking the 40th day after the martyrdom of the third Shia Imam, Hussein ibn Ali (Peace be upon him).

The gathering usually attracts more than 20 million participants every year.

Iraqis take pride in hosting pilgrims participating in Arba'een, many of which are from Iran. The event has consequently turned into a symbol of unity between the people of the two countries who deeply venerate Imam Hussein.

'US plot' in Iraq

The comments also come against the backdrop of several days of protests against mismanagement and corruption in Iraq, with certain demonstrations descending into violence and bloody clashes.

Speaking on Sunday, Iraq Interior Ministry spokesman Major General Sa'ad Ma'an Mousavi said a total of 104 people have lost their lives as result of the unrest.

More than another 6,000 have also been injured, he added.

Iraqi officials have claimed that "unidentified snipers" have shot at protesters and security forces in a bid to provoke clashes between the two.

Some Arab media outlets and observers have said that US-backed elements are trying to influence protests in a bid to create instability and push certain political agendas in the country.

Last week, the Lebanese Arabic-language daily newspaper al-Akhbar reported that Iraqi security sources have uncovered a US-backed plan seeking to install a pro-Washington government in Baghdad by provoking internal strife and instability in the country.