Trump defends decision to pull US forces out of northern Syria

TEHRAN, oct 13_US President Donald Trump has defended his decision to pull American forces out of northern Syria in the face of mounting criticism. 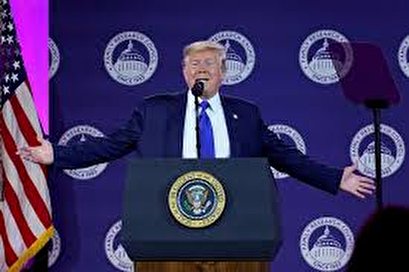 TEHRAN, Young Journalists Club(YJC)_Days after the US had withdrawn its forces and abandoned its Kurdish allies in the area, Turkey launched its military campaign there, dubbed Operation Peace Spring, which Ankara says is meant to purge the Syrian region of YPG militants. Turkey views YPG militants as terrorists linked to local autonomy-seeking militants of the Kurdistan Workers’ Party (PKK).

The offensive is Turkey's third such military operation inside Syria against the Kurds since 2016. It has sparked widespread condemnations as well as concerns about the humanitarian situation of the civilian population and a possible resurgence of the Daesh terrorist group.

Speaking before a crowd of evangelicals on Saturday, Trump did acknowledge that his choice was unpopular, but asserted that it was time to stop US soldiers’ participation in an “endless war.”

“I don’t think our soldiers should be there for the next 50 years guarding a border between Turkey and Syria when we can’t guard our own borders at home,” Trump said.

Trump, however, garnered muted applause from the audience as many in the religious community have condemned the president’s move.

The US has "paid a lot of money to the Kurds over the years", said the president, adding, but “don’t forget, they are fighting for their land, they haven’t helped us fight for our land.”

Meanwhile, Pat Robertson, a longtime Trump supporter and founder of the Christian Broadcasting Network, had said Trump was “in danger of losing the mandate of heaven” for betraying the Kurds.

On Friday, the Pentagon said Washington was "greatly disappointed" by the Turkish incursion, noting the US had not abandoned its Syrian Kurdish allies to a Turkish military onslaught.

"We are not abandoning our Kurdish partner forces, and US troops remain with them in other parts of Syria. The impulsive action of President Erdogan to invade northern Syria has put the United States in a tough situation."

The Pentagon later that day threatened to take an "immediate defensive action" after a contingent of its forces was caught up in Turkish shelling in the area.

Pentagon spokesman Navy Captain Brook DeWalt said, "The United States remains opposed to the Turkish military move into Syria and especially objects to Turkish operations outside the Security Mechanism zone and in areas where the Turks know US forces are present."