US imposes sanctions on Turkey over Syria offensive 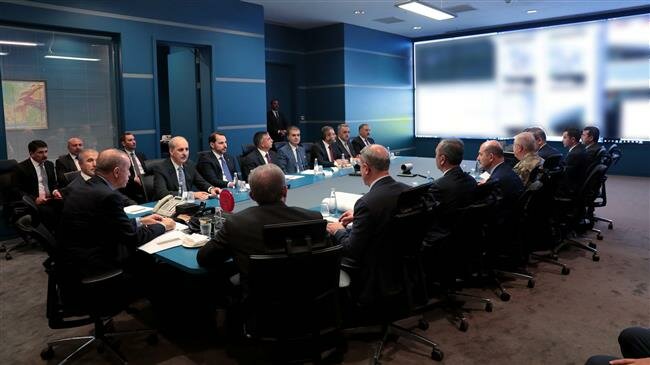 TEHRAN, Young Journalists Club(YJC)_The US Department of the Treasury said in a statement on Monday that it has imposed sanctions on Turkey's Ministry of National Defense and the Ministry of Energy and Natural Resources, as well as the heads of the two ministries and the minister of the interior in response to the country’s military operations in Syria.

Earlier on Monday, President Donald Trump also released a statement to announce new sanctions against "current and former officials of the Government of Turkey and any persons contributing to Turkey's destabilizing actions in northeast Syria."

He said he will be soon issuing an "Executive Order" which authorizes the imposition of these sanctions.

He also vowed to increase tariffs on Turkish steel by up to 50 percent, and immediately stop negotiations with respect to a $100 billion trade deal with Turkey.

Pence announced that he would be traveling to the region "as quickly as possible."

In another tweet on Monday, Trump said that "big sanctions" on Turkey were coming in response to the country's military offensive in northern Syria.

"Big sanctions on Turkey coming! Do people really think we should go to war with NATO Member Turkey? Never ending wars will end!" he tweeted.

Turkey on Wednesday began pounding the positions of the Syrian Democratic Forces (SDF) with jets and artillery and sent in troops to purge them from the area east of Euphrates.

The offensive came three days after Trump announced he would pull US troops from the region, effectively exposing its allied Kurdish militants to their archenemy, Turkey.

Shortly after the attack began, a bipartisan group of senators brought legislation that would freeze all assets Erdogan and other Turkish leaders have in the US and impose visa restrictions until Ankara withdraws from Syria.

It would also slap sanctions on entities that do business with Turkey's military or support its domestic energy industry for use by its armed forces.

Trump's move to withdraw troops from Syria was widely condemned by both Republican and Democratic Party lawmakers in Congress.

Pelosi said that she will continue to criticize Trump's decision to pull out US troops from Syria.

She also said that both houses of Congress will work together to "oppose this irresponsible decision."

"President Trump gave Turkey the green light to attack our Kurdish partners, betraying the thousands of fighters who gave their lives to keep the world safe from the barbarism of ISIS (Daesh)," Pelosi said in the statement.

"His erratic decision-making is threatening lives, risking regional security and undermining America’s credibility in the world,” she said.