TEHRAN, oct 16_Turkish President Recep Tayyip Erdogan says his country’s military forces and the Turkish-backed militants of the so-called Free Syrian Army (FSA) have launched a long-threatened offensive in northeastern Syria against Kurdish militants from the People's Protection Units (YPG) to push them away from border areas. 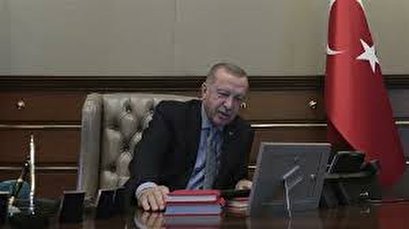 TEHRAN, Young Journalists Club(YJC)_“Operation Peace Spring will neutralize terror threats against Turkey and lead to the establishment of a safe zone, facilitating the return of Syrian refugees to their homes.

“We will preserve Syria’s territorial integrity and liberate local communities from terrorists,” Erdogan wrote in a post published on his official Twitter page on Wednesday.

We will preserve Syria’s territorial integrity and liberate local communities from terrorists.

Syria's state-run television reported that the Turkish army launched an operation in the country's north by carrying out an airstrike on the city of Ras al-Ayn in the northeastern province of al-Hasakah.

Ankara has made it clear that it will push ahead with its imminent invasion of northern Syria whatever the cost.

Ankara views the YPG as the Syria branch of the homegrown Kurdistan Workers' Party (PKK) militant group, which has been seeking an autonomous Kurdish region in Turkey since 1984.

The report added that smoke could be seen rising from buildings in the city.

SDF says it's 'ready to face any attack'

“Turkey is trying through these attacks to open new lands for the mercenaries of Daesh (Takfiri terrorist group) and is trying to lengthen the life of these groups. We do not agree with any attacks by Turkey and the people supporting it.

“We send a message to the whole world again: We will not target Turkey but if they insist in attacking us and occupying our lands we will trigger our right in defending our project (ourselves) until last blood. We are ready to face any kind of attack,” Mousa pointed out.

Meanwhile, Turkish-language CNN Turk television news network reported that Turkey’s Foreign Ministry had called in US Ambassador to Ankara David M. Satterfield to brief him on the country’s military offensive into northeastern Syria.