TEHRAN, oct 16_An Israeli military court has sentenced a Palestinian to 18 years in prison and imposed a hefty fine on him in keeping with the Tel Aviv regime’s racial profiling and its policy of repression, abuse and deliberate medical negligence. 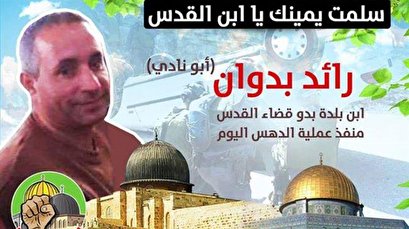 Badwan has been held in the Ofer prison since August 6, 2015, and has attended more than 56 trials ever since he was arrested. He suffers from several chronic diseases, such as heart disorder, high blood pressure and diabetes, and has more than ten gunshot wounds on his body.

The Palestinian was arrested for allegedly carrying out a run-over operation on the 60th Street near the town of Sinjil northeast of Ramallah. Israeli soldiers fired 12 bullets at his car, all of which lodged in his body.

Badwan was transferred to the intensive care unit at the Shaare Zedek Medical Center in Jerusalem al-Quds, where he underwent surgery. Doctors removed six bullets, but the rest remained in various parts of his body, including the neck, head, chest, hand and back.

The center expressed concern that resumption of Arbeed’s interrogation can lead to further deterioration in his health and endanger his life.

The PCHR called on the UN special rapporteurs to publicly condemn Israel’s use of extraordinary measures, which amount to torture, against Palestinian prisoners, and to compel the Israeli regime to stop the practice.