US bombs munitions storage bunker left behind in Syria

TEHRAN, oct 17_The United States has bombed its own munitions storage bunker at a base in northern Syria after American troops vacated the site prior to a Turkish offensive in the region. 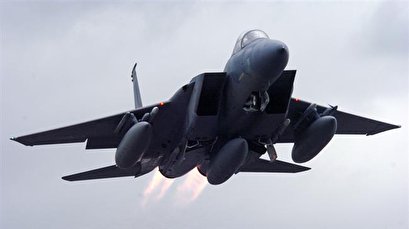 TEHRAN, Young Journalists Club(YJC)_US Army Colonel Myles Caggins, a spokesman for the US-led military coalition purportedly fighting Daesh, tweeted on Wednesday that two fighter jets had targeted a cement factory, which served as a coordination center for the alliance and Kurdish militants in Syria.

He also noted that before the strike, “all coalition personnel and essential tactical equipment” had left the military compound, which is located between the Syrian city of Ayn al-Arab, also known as Kobani, and the town of Ayn Issa.

On October 16, after all #Coalition personnel and essential tactical equipment departed, two Coalition F-15Es successfully conducted a pre-planned precision airstrike at the Lafarge Cement Factory to destroy an ammunition cache and reduce the facility’s military usefulness.

On Tuesday, Caggins told Fox News that the Kurdish-led Syrian Democratic Forces (SDF) had “set fire to, then vacated, its facilities and equipment” as “Turkish-backed militias advanced towards the Lafarge Cement Factory.”

Republican Representative Adam Kinzinger of Illinois condemned US President Donald Trump over the bombing of the weapons storage site.

Meanwhile, CNN reported that the airstrike was meant to prevent the munitions and other equipment from falling into the hands of Turkish-backed armed groups.

An unnamed American defense official told CNN that no other forces were nearby at the time of the air raid.

A senior US military official also explained to CNN that US forces in northern Syria had pulled out of all locations in the Arab country to consolidate at a location near Ayn la-Arab, where they would be air lifted out in the coming weeks.

Syrian government forces, he added, are believed to have moved into the city of Raqqah in the wake of the US departure.

Turkey launched the offensive, called Operation Peace Spring, on October 9 with the aim of purging the northern Syrian regions near its border of Kurdish militants, whom it views as terrorists linked to local autonomy-seeking militants of the Kurdistan Workers’ Party (PKK).

The developments led the Kurds to reach out to the Damascus government for support, reaching an agreement with Syrian troops to enter towns near the border with Turkey.