TEHRAN, oct 17_Officials and astronauts at NASA recognize the historical significance of Friday's spacewalk to replace battery system hardware -- it is the first to feature an all-female repair team. 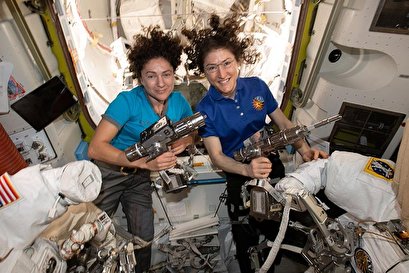 The units regulate the amount of charge put into each of the station's batteries.

With five spacewalks scheduled for October, the potential was thought to be high for two women to venture outside the International Space Station, though Meir downplayed it recently.

"Everyone up here is fully qualified to do a spacewalk," Meir told reporters during a video conference earlier this month.

But when the pair step outside for the spacewalk, they will make history.

"Anne and Christina will have the opportunity to be the first all-female EVA, which I think will be a proud moment for NASA if the assignments stay as they planned," Mary Lawrence, a NASA spacewalk flight director, said during a March 19 press conference.

"If they inspire that next generation of space explorers, they're certainly worthy of that inspiration, and I'm just really proud to be a part of it."

But when McClain decided the large spacesuit she wore during her first spacewalk was not the right fit, and that she would feel more comfortable in the medium size, NASA officials nixed the history-making mission. Only one medium spacesuit existed, and Koch needed that size, too.

This time around, the necessary spacesuits are available, though all those involved have somewhat downplayed the walk's significance.

"Based on workload, [it] makes sense for the women to do their spacewalk [this week]," Megan McArthur, deputy chief of NASA's Astronaut Office, told reporters on Tuesday.

According to McArthur, NASA doesn't consider gender when planning spacewalks.

"This was the right crew to send out for this set of tasks," she said. "The fact that it'll be two women is just a reflection that we have so many qualified women in the office."

Focus on the mission

Margaret A. Weitekamp, curator and department chair of the space history department at the Smithsonian Air and Space Museum, said she's not surprised by the business-as-usual approach to the historic mission.

"For those us who've quietly speculated about when this milestone might happen -- because we're interested in women in space -- we agreed that it would happen because there was the right opportunity, the right spacesuits, the right mission and the right personnel, not because there was publicity to be gained," Weitekamp told UPI. "I think it does speak in some ways to maturity in human space flight."

Despite the more reserved approach, NASA and the agency's astronauts are clearly aware of the significance of the mission, particularly as it relates to inspiring young women.

"There are a lot of people that derive motivation from inspiring stories about people that look like them, and I think that is an important aspect of the story to tell," astronaut Koch told reporters earlier this month.

"What we're doing now, shows all that work went into it to get us where we are today," astronaut Meir said. "And the nice thing about it for us is that we don't really think about it on a day-to-day basis."