TEHRAN, oct 17_In a newly published study, scientists uncovered the secrets of the scales that protect Arapaima gigas, a large Amazonian fish, from the powerful bites of piranhas. 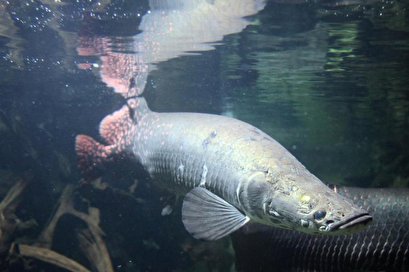 TEHRAN, Young Journalists Club(YJC)_Arapaima gigas is one of largest freshwater species in the world, but even the massive air-breather, which must regularly surface for oxygen, is not immune to the jaws of piranhas. That's why the species has, over thousands of years, evolved especially strong scales.

When piranhas bite the large fish, its scales bend and dent, but don't tear or crack. To better understand the resiliency of the species' scales, scientists subjected the freshwater armor to a series of lab tests.

Closer examination of the scales revealed them to be composed of two main components: a tough but flexible inner layer and a harder outer layer of scales. Scientists likened the armor to a bullet-proof vest, which features layers of webbing sandwiched between pieces of plastic.

While the layers of ballistic body armor are fused by adhesives, the fish's scales are bound together at atomic-scale by collagen. The two layers grow into one another, forming a cohesive defensive shield.

"A window may appear strong and solid, but it has no give. If something attempted to puncture it, the glass would shatter," Robert Ritchie, a materials scientist at the University of California, Berkeley, said in a news release. "When nature binds a hard material to a soft material, it grades it, preventing this shattering effect. And in this case, the binding structure is mineralized collagen."

The collagen found within the scaly armor of Arapaima gigas is thicker than the layers deployed by other fish, and scientists suspect it is this thickness that makes the species' skin so tough.

In the lab, scientists soaked scales in water for two days before peeling back the scaly layers while applying centralized pressure. The scales slowly peeled away and a crack appeared near the focus of pressure. However, scientists observed the crack was quickly contained by the surrounding scales. When the crack finally reached the collagen, the layer deformed but didn't break.

Researchers detailed the structural secrets of Arapaima gigas scales this week in the journal Matter.