TEHRAN, oct 18_More than 750 Israeli settlers have violated the al-Aqsa Mosque compound in the occupied Old City of East Jerusalem al-Quds under the strict protection of regime forces as part of recent mass break-ins into the Islamic holy site. 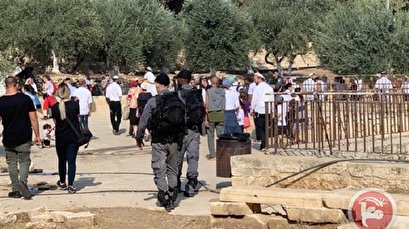 It added that settlers stormed the compound in nine groups and received information from rabbis about the alleged temple mount while dozens of police and security forces escorted the settlers during their tours at the holy site.

Outside the compound and particularly at its gates, Israeli soldiers also imposed restrictions on Palestinian worshipers’ access to the mosque, demanded their ID cards, frisked them, and searched their bags, it added.

The report also said that many Muslim worshipers and al-Aqsa guards were present in different areas of the compound to protect it against further desecration and tried to prevent the settlers from walking around freely.

On Tuesday, at least 300 Israeli settlers entered the compound from the Moroccan Gate, responding to calls made by extremist groups for mass break-ins at the al-Aqsa Mosque compound to mark a religious event.

On October 6, more than 120 Israeli settlers also violated the compound from the same gate, attempting to perform rituals.

Except for Fridays and Saturdays, Israeli settlers violate the mosque in the morning and in the afternoon on almost a daily basis.

According to an agreement signed between Israel and the Jordanian government after Israel’s occupation of East Jerusalem al-Quds in 1967, non-Muslim worship at the compound is prohibited.

In a separate development, the Palestine Information Center said that Israeli forces seriously wounded a Palestinian young man from East Jerusalem al-Quds on Wednesday night after opening fire on him.

The Israeli military said the Palestinian man was allegedly trying to carry out a car-ramming attack in Am'ari refugee camp near Ramallah city, adding that no Israeli soldiers sustained injury during the incident.

Later on, the wounded Palestinian, whose identity had not been disclosed yet, was taken to Shaare Zedek Hospital in Jerusalem al-Quds.

The incident came after Israeli forces raided the refugee camp and detained two Palestinians under the pretext of their alleged affiliation with a Palestinian faction and their involvement in activities against Israel.

The shooting incident provoked local young men into throwing stones at the Israeli soldiers, who responded by opening fire at them upon their withdrawal from the camp.

The Israeli military regularly opens fatal fire on Palestinians whom it accuses of seeking to attack its personnel.