TEHRAN, oct 20_Foreign Minister Mevlut Cavusoglu says Turkey does not want to see a single Kurdish militant left in the planned "safe zone" in northern Syria at the end of a fragile ceasefire in the region. 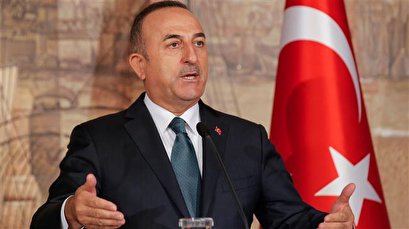 TEHRAN, Young Journalists Club(YJC)_In an interview with broadcaster Kanal 7 on Sunday, Cavusoglu said Ankara expected YPG Kurdish militants to be removed from areas where the Syrian government has recently been deployed.

He also said Turkey and Russia will exchange views on the removal of the YPG militants from the northern Syrian cities of Manbij and Ayn al-Arab, also called Kobani, during talks in the Russian Black Sea resort of Sochi next week.

On Saturday, Turkish President Tayyip Erdogan said he would discuss the Syrian government forces' deployment to the “safe zone” during talks with his Russian counterpart Vladimir Putin in Sochi.

He, however, warned that Ankara would “implement its own plans” if a solution were not reached, adding Turkey would “crush the heads” of Kurdish militants in northern Syria if they did not withdraw during the truce period.

Turkey launched the offensive on October 9 with the aim of purging the northern Syrian regions near its border of Kurdish militants, whom it views as terrorists linked to local autonomy-seeking militants of the Kurdistan Workers’ Party (PKK).

Ankara on Thursday agreed to pause its incursion into Syria for 120 hours while the US facilitates the withdrawal of Kurdish SDF militants from a 20-mile safe zone along the Syrian-Turkish border. The ceasefire will expire on Tuesday.

However, sporadic clashes have continued and each side has blamed the other for violating the truce.

On Sunday, Turkey said one of its soldiers was killed and another wounded after an attack by the Kurdish militants in the town of Tell Abyad in Syria's Raqqah Province.

The Turkish Defense Ministry said in a statement that an attack by YPG militants with anti-tank and light weapons struck the soldiers who were carrying out a reconnaissance and surveillance mission.

"The immediate response based on self-defense was given," it said. "Despite the Safe Zone Agreement with the United States... 20 harassments/violations were committed by PKK/YPG terrorists."