TEHRAN, oct 20_British Prime Minister Boris Johnson has sent an unsigned letter to the European Union requesting a delay to the UK’s exit from the bloc. 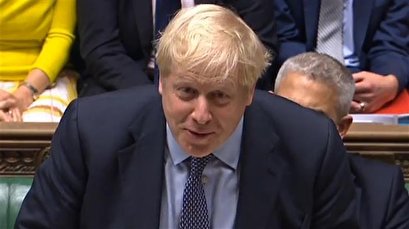 TEHRAN, Young Journalists Club(YJC)_This came hours after he was required by law to ask the EU for an extension to the 31 October deadline following his failed attempt to pass his EU divorce deal on Saturday.

The first letter was accompanied by a second one which was a photocopy of the five pages of the Benn legislation, requiring him to apply for the extension until the end of January 2020.

Johnson, who had previously said he would rather be “dead in a ditch” than ask the EU to delay Brexit, wrote a third but a signed letter, in which he said he did not want an extension as it would “damage” the UK’s and the EU’s interests.

“I have made clear since becoming Prime Minister and made clear to parliament again today, my view, and the Government’s position, that a further extension would damage the interests of the UK and our EU partners, and the relationship between us,” Johnson said in the letter, published on Twitter by the Financial Times’ Brussels correspondent.

"We must bring this process to a conclusion so that we can move to the next phase and build our new relationship on the foundations of our long history as neighbors and friends in this continent," Johnson wrote in his letter.

EU Council President Donald Tusk, who confirmed he had received the letters, said on Twitter, “I will now start consulting EU leaders on how to react.”

Meanwhile, French President Emmanuel Macron told Johnson that Paris was seeking swift clarification on the situation following the Commons vote on Saturday, according to an official at the French presidency.

“He signaled a delay would be in no one’s interest,” the official told Reuters.

The EU has repeatedly asked London to offer “legal and operational” proposals for the changes Johnson wishes to be made to a deal former prime minister Theresa May negotiated with the bloc in 2018.

May took office after former prime minister David Cameron resigned following the Brexit referendum in June 2016. She had consistently defended her Brexit strategy, saying it was the only way to secure a smooth withdrawal from the EU.

The British parliament, however, had repeatedly rejected her Brexit deal.