TEHRAN, oct 21_Authorities in Chile have extended a state of emergency after seven people lost their lives in violent clashes, looting and arson attacks during protests over a hike in public transportation costs. 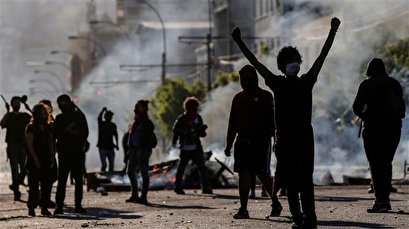 TEHRAN, Young Journalists Club(YJC)_Addressing a presser on Sunday night, Interior Minister Andres Chadwick said the decision was a response to an “escalation of violence and vandalism,” two weeks after the student-led protests first broke out in the South American state.

President Sebastian Pinera canceled the fare increase — which would have raised the price of peak hour travel from 800 to 830 pesos ($1.13 to $1.15) — on Saturday, but the move failed to stop the demonstrations that continued to rage through the capital Santiago and several other cities on Sunday.

Fierce clashes were reported between police and protesters on Sunday, while rioters set fire to buses and vandalized subway stops.

Chadwick cited 70 “serious incidents of violence”, including the looting of 40 supermarkets and other businesses, adding that seven people had been killed in incidents related to the protests, without elaborating.

Firefighters, however, said five people had died in a garment factory burned by rioters in Renca, a northern suburb of Santiago.

Military and police numbers were at 10,500 in Santiago and would be reinforced where necessary, said the minister.

According to Chadwick, 62 police officers and 11 civilians were injured in the violence, and that nearly 1,500 people had been arrested.

The minister said the state of emergency applied in Santiago early on Saturday would be rolled out to the cities Chile’s north and south, including Antofagasta, Valparaiso, Valdivia, Chillan, Talca, Temuco and Punta Arenas.

Calls have also been circulating for a national strike on Monday.

President Pinera defended the decision to extend the state of emergency, saying, “We are at war against a powerful enemy, who is willing to use violence without any limits.”

He said Santiago’s metro and bus system would be offering partial services on Monday, asking the Chileans to stick together to remain safe, and help one another during hardships.

“Tomorrow we will have a difficult day,” he said. “We are very aware that (the perpetrators of riots) have a degree of organization, logistics, typical of a criminal organization.”

“Today is not the time for ambiguities. I call on all my compatriots to unite in this battle against violence and delinquency,” the president added.. “This desire to break everything is not a protest, its criminal.”