N Korea: Actions of US, South to blame for rising tensions on Korean Peninsula

TEHRAN, oct 21_North Korea blames actions of the neighboring South and the United States for rising tensions on the Korean Peninsula, urging Washington and Seoul to find new solutions to help break an impasse in the diplomatic process with Pyongyang and resolve the standoff in the volatile region. 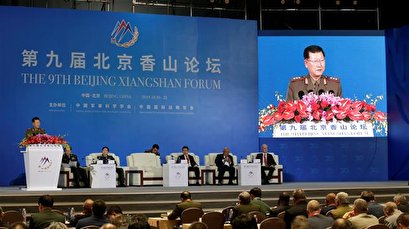 TEHRAN, Young Journalists Club(YJC)_The North’s Vice Minister of the People’s Armed Forces Kim Hyong Ryong made the comments on Monday at the three-day Xiangshan Forum in Beijing, which is themed “Maintaining International Order and Promoting Peace in the Asia-Pacific.”

The top official said it has been more than one year since a joint statement was adopted following a summit between US President Donald Trump and the North’s leader Kim Jong-un in Singapore last year.

However, “there is no progress in improving bilateral relations between the two countries,” said the official, arguing this is “completely because of the US’ anachronistic, hostile policies against” the North.

Based on that statement, the two sides agreed to work toward denuclearization, but that agreement, made in a written document, was broadly worded and the details of such cooperation remain to be worked out.

Following that agreement, Pyongyang took several steps toward denuclearization; it demolished at least one nuclear test site and agreed to allow international inspectors into a missile engine test facility.

But diplomacy snagged as the US refused to reciprocate unilateral North Korean steps. And later, the country’s leader indicated that Pyongyang would resume its nuclear and missile tests.

At the Beijing forum, the North Korean official said his country has made efforts towards the establishment of lasting piece on the Korean Peninsula, but that the situation has degenerated into a “dangerous, vicious cycle” of exacerbating tensions because of the actions of the American and South Korean governments.

“Bearing in mind our firm will to safeguard peace in the region, the United States and the South Korean authorities must refrain from any actions disrupting the stability of the situation and come up with a new way for solving the problem,” Kim said.

The North Korean official slammed South Korea for its “double-dealing attitude” because of Seoul’s refusal to stop joint war games with the US and purchases of advanced weapons from Washington.

Pyongyang and Seoul engaged in unprecedented talks in early 2018. Late last year, the two Korean leaders agreed in a meeting in Pyongyang to take a step closer to peace by turning the Korean Peninsula into a “land of peace without nuclear weapons and nuclear threats.”

However, inter-Korean talks have also stalled since a second summit between Trump and Kim collapsed without an agreement in Vietnam.