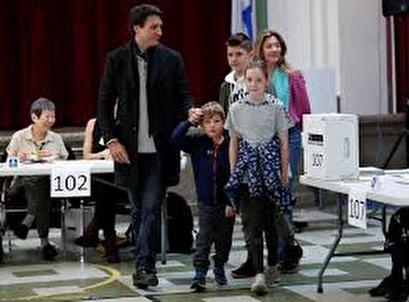 TEHRAN, Young Journalists Club(YJC)_According to a projection by the Canadian channel, CBC, the Liberals are expected to have the largest bloc in the new parliament; however, they fall short of a majority (170 seats).

If the results stand, Trudeau will need the support from other parties to provide a majority.

CBC reports that the Liberal Party have won or are leading in 145 seats, compared to 119 for the Conservatives. pic.twitter.com/nAA550gqFI

Rather than create a formal coalition, the prime minister will likely use a process known as confidence and supply, in which the Liberals reach out to different parties in order to secure votes for legislation.

The results open the door to the leftwing New Democratic Party (NDP) and Bloc Québécois to the balance of power a minority government.

The star of the evening was Yves-François Blanchet, leader of the separatist Bloc which managed to more than triple its seat count over the 2015 election.

Jagmeet Singh of the leftwing NDP, who surged in the polls in the final weeks of the campaign with the aid of viral social media videos, wasn’t able to convert the popularity into electoral wins. The party’s 44 seats were nearly cut in half.

More than 27-million Canadians were eligible to cast their ballots for the 338-seat parliament.

The Liberals won power in 2015 and held 177 seats when the election was called. In Canada, a party must win 170 or more seats to secure a majority mandate.