TEHRAN, oct 22_Protests have erupted in Bolivia after the main opposition candidate in the presidential election refused to concede victory to incumbent President Evo Morales. 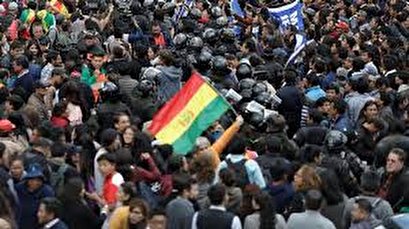 TEHRAN, Young Journalists Club(YJC)_The supporters of President Morales clashed with those of Carlos Mesa — who came a close second to Morales in the Sunday polls — in the capital, La Paz, on Monday.

Scuffles also broke out between protesters and police, who fired tear gas, in La Paz and the cities of Oruro, Potosi, and Cochabamba.

Images on local television also showed protesters in the cities of Tarija and Sucre burning mounds of ballot boxes and setting fire to vote counting stations.

In Camiri, the center of Bolivia’s gas industry, protesters were seen attacking the offices of the national oil company.

The violence erupted after the electoral board started releasing new data late on Monday following an almost 24-hour halt in the release. Before that, an official count of nearly 84 percent of the ballots showed the election was going to a second round for the first time in over a decade.

Mesa was already celebrating going to a second round on Sunday.

The Supreme Electoral Tribunal (TSE), however, updated its count on Monday, which gave President Morales a 10-point advantage.

According to the updated results, Morales garnered 46.85 percent of the votes, and Mesa 36.73 percent.

The official final count is not due in seven days.

Opponents have accused authorities of rigging the votes to help Morales avoid a runoff against the opposition.

Mesa has called on people “to conduct a battle in defense of the vote.”

Morales has won his previous three terms with solid majorities. The South American country has been experiencing years of political and economic stability and growth under his rule. The economy has grown by an annual average of about 4.5 percent, well above the regional average, and the International Monetary Fund (IMF) predicts it will grow at four percent this year.