Facebook bends the knee to outrage grifters in push to ‘protect our democracy’ – but who will protect it from them?

TEHRAN, oct 22_ Mark Zuckerberg’s social behemoth is desperately trying to get into the Democrats’ good graces by handing over cash and control to those who shriek the loudest about “attacks on our democracy.” Not surprisingly, it isn’t working. 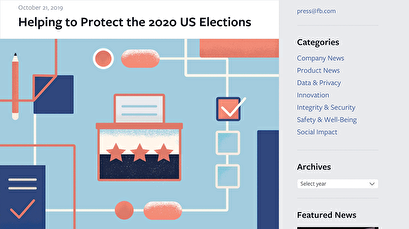 Facebook also announced it had shut down four “inauthentic networks” on Instagram, one “Russian” and three “Iranian” – supposedly not based on content they posted, but their behavior.

Facebook is under pressure to stop a repeat of the 2016 presidential election in the U.S., when Russian trolls spread disinformation on the platform. https://t.co/23OXOs9RxV

As news coverage of the measures admits, all of this is based on the assertion – accepted as fact without evidence – that “Russian trolls” used the social media platform to meddle in the 2016 presidential election. Pointing out that this remains an unproven allegation, and itself a fallback position from the “Russian collusion with Trump” conspiracy theory, gets one labeled a “Russian agent” of course.

“I can’t say exactly what their goal was,” Nathaniel Gleicher, Facebook’s head of cybersecurity policy, told Reuters about the banned accounts. It turns out the person responsible for making the determination was none other than Ben Nimmo, formerly – or still? – of the Atlantic Council think-tank, now at the “social media analysis company” Graphika.

In case that sounds familiar, Graphika was one of the companies commissioned by the US Senate Intelligence Committee to validate their assumptions about “Russian meddling,” alongside the actual social media meddlers New Knowledge.

Nimmo himself was exposed last year as a hatchetman of the Integrity Initiative, a shady outfit funded and operated by the British government with the task of shaping public opinion against Russia. As for his “expertise” in social media research, the best example of it is the argument that imperfect English makes one a sure Russian spy, troll, bot – or all three.

Nor is he alone in this. The inability of Hillary Clinton and the Democrats to accept the outcome of the 2016 election has spawned a veritable bubble of “cyber experts” and “troll hunters,” cashing in by accusing social media platforms of enabling “Russian” and other foreign meddling, and demanding to be paid to prevent it. The same dynamic has driven the explosive growth of the “fact-checking” industry, which mainly serves to target non-establishment politicians and non-mainstream media outlets.