Syria will continue to fight terrorism by all legitimate means: Assad

TEHRAN, oct 23_Syrian President Bashar al-Assad has emphasized his complete refusal of any invasion of Syrian land under any pretext, noting that Syria will continue to fight terrorism by all legitimate means. 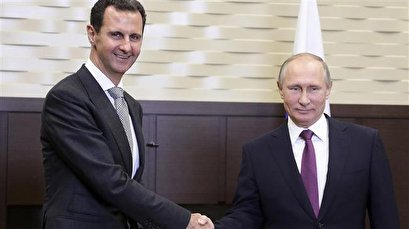 TEHRAN, Young Journalists Club(YJC)_Speaking in a telephone conversation with his Russian counterpart Vladimir Putin late on Tuesday, Assad thanked the Russian leader for reaching an agreement with Turkish President Recep Tayyip Erdogan to establish "a safe-zone" in northeastern Syria and conduct joint patrols in the area after marathon talks in the Black Sea resort of Sochi.

The Syrian president also “expressed his full support for the results of the work, as well as the readiness of the Syrian border guards, together with the Russian military police, to reach the Syrian-Turkish border.”

Putin, for his part, briefed Assad on the results of his talks with Erdogan, and highlighted that the main provision of the memorandum of understanding agreed upon during the meeting was to restore the territorial integrity of Syria and to continue joint efforts concerning Syria’s political settlement, especially the work within the framework of the country’s constitutional committee.

The Russian president told Assad that any agreement between Turkey and Russia will focus on fighting all kinds of terrorism and dismantle any separatist agendas on the Syrian land.

Earlier in the day, Putin and Erdogan signed a memorandum of understanding, stating that Kurdish forces must withdraw from a Turkish-ruled "safe zone" in northeast Syria within 150 hours, after which Ankara and Moscow will run joint patrols around the area.

The announcement was made hours before a United States-brokered five-day truce between Turkish and Kurdish-led forces was due to expire.