TEHRAN, oct 23_Support for impeaching US President Donald Trump surged among political independents and rose by three percentage points overall since last week, according to a Reuters/Ipsos poll released on Tuesday. 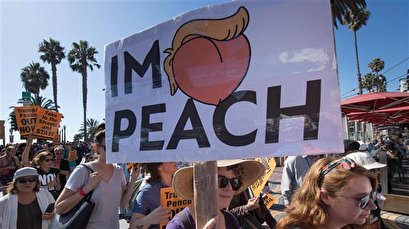 The Oct. 18-22 poll showed public opinion continued to shift as Americans digested a flurry of news over the past several weeks stemming from the congressional impeachment inquiry and Trump’s decision to pull troops from northern Syria.

Overall, 46% of Americans said they supported impeachment and 40% said they opposed it.

Support for impeachment was relatively steady among Republicans and Democrats over the past week but it surged among independents, a group that includes people who neither identify as Democrats nor Republicans and do not favor either party when they vote.

Among independents, 45% said in the latest poll they supported impeachment and 32% said they opposed it, the strongest level of support recorded in more than a year.

A little more than 1 in 3 independents had said they were in favor of impeachment in more than a dozen previous Reuters/Ipsos polls since June 2018.

Trump leveraged his advantage in support among independents to narrowly win the White House in 2016 and it is expected that he will need them again to be re-elected.

The Reuters/Ipsos poll was conducted after several administration officials backed up portions of a government whistleblower’s report that alleged Trump pressured Ukraine President Volodymyr Zelenskiy to investigate one of his main political rivals, former Vice President Joe Biden. The report said Trump linked the probe to the release of foreign aid.

Trump has denied any wrongdoing. He has tried to block administration officials from cooperating with the investigation and this week said he was the victim of a “lynching,” a racially charged description that was quickly condemned by many lawmakers.

The president also ordered U.S. troops to withdraw from northern Syria two weeks ago ahead of Turkey’s cross-border offensive against the Kurds. The Turkish offensive displaced hundreds of thousands of people and raised concerns that it would allow prisoners from the Islamic State group to escape.

Trump’s decision drew a sharp bipartisan rebuke in Congress and the poll shows it may have hurt his standing among rank-and-file Republicans.

Overall, the poll found that Americans were more critical of Trump’s handling of U.S. foreign policy and Islamic State than they were in a similar poll in April.

The Reuters/Ipsos poll was conducted online, in English, throughout the United States. It gathered responses from 4,083 adults, including 1,773 Democrats, 1,542 Republicans and 447 independents. It has a credibility interval, a measure of precision, of 5 percentage points.