Trump sends $4.5 million in aid to White Helmets in Syria

TEHRAN, oct 23_US President Donald Trump has authorized $4.5 million in aid to the Western-backed White Helmets operating in Syria, an organization known for staging false-flag chemical attacks in the war-torn country. 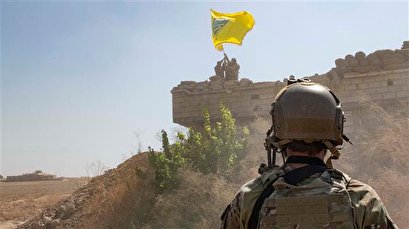 TEHRAN, Young Journalists Club(YJC)_Trump ordered the funds for what is formally known as the Syria Civil Defence group "to continue United States support for the organisation's important and highly valued work in the country," White House spokeswoman Stephanie Grisham said in a statement on Tuesday.

“Over the course of the 8-year conflict in Syria, the SCD has rescued more than 115,000 people, including many ethnic and religious minorities,” the statement added.

The Trump administration also provided $6.8 million in funding to the White Helmets in June.

The group’s name is highly misleading, as the White Helmets have operated solely in areas controlled by anti-government groups in Syria.

Russia and Syria say the group is linked to Nusra Front terrorists. They say the White Helmets have contributed in staging false-flag chemical attacks aimed at accusing the Syrian government of targeting its own people.

In December 2018, the Russia-based Foundation for the Study of Democracy presented evidence showing the group to be harvesting organs of the people they pretended to rescue, and looting the bodies of the fallen, among other things.

Trump's aid comes after he ordered the withdrawal of US forces from northeastern Syria on October 6, clearing the path for an expected Turkish incursion into the region.

US Defense Secretary Mark Esper said Saturday that the nearly 1,000 American troops pulling out of northeastern Syria following a military invasion of the area by Turkey would move to western Iraq.

News agencies reported that US troops had in fact crossed into Iraq from Syria through the Sahela border crossing in the northern province of Dohuk on Monday.

Footage was released of US armored vehicles carrying troops into Iraq, with Iraqi Kurdish sources confirming that American troops had crossed into the semi-autonomous Kurdistan Region.

Trump has announced similar troop withdrawal plans for Afghanistan but his administration has yet to take a step towards fulfilling that promise.