TEHRAN, oct 24_Leaders of Japan and South Korea have agreed to mend ties amid a bitter feud over history and trade that has dragged bilateral relations to their worst in decades. 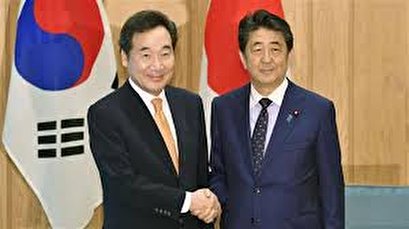 TEHRAN, Young Journalists Club(YJC)_South Korean Prime Minister, Lee Nak-yon, met Japanese Prime Minister, Shinzo Abe, in Tokyo on Thursday on the occasion of the enthronement of Japan's Emperor, with both leaders stressing the importance of rebuilding bilateral relations and expanding cooperation on issues of common concern.

Ties between the two Asian allies have deteriorated since South Korea's top court last October ordered some Japanese firms to compensate Koreans forced to work in their wartime mines and factories.

Japan, arguing that the matter had been settled by a 1965 treaty, censured the ruling as a violation of international law, but the feud has spilled over into trade and security matters.

"Our two nations are important neighbors for each other… Relations are currently in quite a severe state but should not be left that way. If South Korea can keep bilateral promises, that could be a chance to return to a healthy relationship," Abe was quoted as saying by a Japanese government spokesman.

The Japanese government spokesman also quoted Lee as saying he shared the view that dialogue was important, while a parallel statement from South Korea's foreign ministry said Lee agreed relations should not be left in their current difficult state.

"South Korea has also respected and complied with the 1965 Treaty on Basic Relations and Claims, and will continue to do so," according to Seoul's statement.

The South Korean president described Japan in the letter as a key partner for regional peace, according to Yonhap.

The dispute between the two neighbors escalated earlier this year when Japan tightened export controls on materials vital for South Korean chip-makers. Tokyo, in response, dropped Seoul from a list of countries eligible for fast-track exports.

Moreover, South Korea announced in August that it would walk out of a military intelligence-sharing pact with Japan when it expires next month, just as the allies face rising tensions over North Korea's nuclear program.

Japan has the world’s third largest economy, while South Korea has the 11th largest. A trade war between the two could impact not only East Asia, but the global economy.