TEHRAN, oct 24_Iranian Foreign Minister Mohammad Javad Zarif has blamed the US for its contempt for international law, saying the administration of Donald Trump is aiding and abetting Israel to promote its expansionist policy. 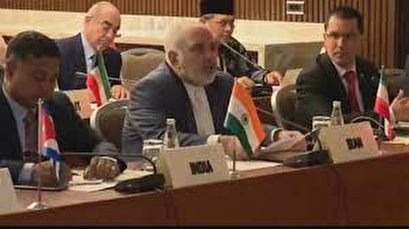 TEHRAN, Young Journalists Club(YJC)_“The extremist and unilateral policy pursued by the US coupled with its contempt for international law has had a devastating impact on the Palestinian people,” Zarif said in an address to the meeting of the Non-Aligned Movement (NAM) Ministerial Committee on Palestine in Baku on Wednesday.

“The Trump administration is aiding and abetting the aggressive Israeli regime in its expansionist behavior, which seeks to undermine the status of the Palestinian issue as the pivotal issue in the Middle East,” he added.

He warned that Washington and Tel Aviv pit regional counties against each other to “eclipse the plight” of Palestinians.

The most important reason for the US administration and the Israeli regime to ignite hostilities within and among the countries of the Middle East region is “to eclipse the plight of the Palestinian people and force a regional realignment to its detriment,” he noted.

He expressed regret that certain regional countries were siding with the US and Israel, and underlined the need for unity among NAM members in the face of plots to marginalize the Palestinian issue.

“What is indeed extremely regrettable is that some states in our region are buying this trick, thus furthering the agenda of the US and the Zionist regime. It is of great importance that the NAM countries maintain and strengthen their united front and do not allow the Zionist regime and its enablers to succeed in their aim of relegating the Palestinian question to the margin,” he said.

He said the US’ “vicious moves” about Jerusalem al-Quds are “frustrating and detrimental” to the efforts towards finding a just and lasting solution to the Israeli-Palestinian issue, referring to Washington’s relocation of its embassy from Tel Aviv to Jerusalem al-Quds and its recognition of the disputed occupied city as Israel’s “capital.”

“While none of the US administrations in the past ever intended to help Palestinians create a viable state, this administration has taken off the mask and pursues the same policy in an aggressive and shamelessly transparent way, providing more encouragement to the expansionist Zionist regime,” he said.

The top Iranian diplomat also reacted to Israeli Prime Minister Benjamin Netanyahu’s declaration to annex the Jordan Valley in the occupied West, saying “this provocative threat followed previous similar cynical declarations about the annexation of other Israeli illegal settlements. It came in the wake of the Israeli attempts to illegally and forcibly alter the demography, character, identity and legal status of the Palestinian territory occupied in the past seven decades.”

Zarif called on all countries, including NAM member states, to “stand firm—not just in our declarations, but in our policies and actions—against aggression by the Israeli regime and their American enablers.”

“Undoubtedly, any initiative detached from international law and dismissive of Palestinian human and political rights can neither be viable, nor just, and will certainly fail abjectly,” he further noted.

He also reaffirmed Iran’s policy to world with all Muslim and non-NAM countries “to create a strong unified stance to reverse the exacerbating audacity of the Zionists.”