Democrats promise to push ahead with impeachment

TEHRAN, oct 24_Democrats have promised to push ahead with an impeachment inquiry into President Donald Trump, after a group of Republican lawmakers caused chaos by storming a hearing session in the case. 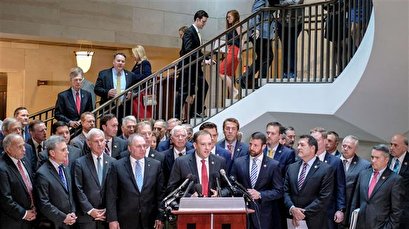 TEHRAN, Young Journalists Club(YJC)_Encouraged by Trump to put up a stronger fight against the Democratic efforts to impeach him, a group of more than two dozen Republicans stormed into the hearing room on Wednesday, as a witness was answering questions with regards to the president’s dealing with Ukraine.

The Republicans, who were not allowed to attend the hearing, forced their way into the room before Laura Cooper, the US defense official who oversees Ukraine and Russia affairs, testified behind closed doors.

They accused the Democrats in charge of the inquiry as carrying out the inquiry in secret, without giving the president and his party the chance to a fair process.

The lawmakers brought cellphones into the facility despite a ban on electronic devices and some of them refused to remove their phones when they were instructed by the authorities, a House Intelligence committee official said.

The House parliamentarian ruled the move as a clear violation of House rules by the Republican lawmakers, the official added.

House Republican Whip Steve Scalise, who led the confrontation, told reporters later in the day that his party has more in store to get what it wants.

"There are going to be other things done to push even harder to have a fair and open process," he said.

The Democrats, however, viewed the move as an act of desperation by the Republican Party.

"They're freaked out. They're trying to stop this investigation," Democratic Representative Ted Lieu said. "They know more facts are going to be delivered which are absolutely damning to the president of the United States."

Before storming the hearing room, dozens of House Republicans denounced the impeachment process as a "joke," a "railroad job," a "charade" and "Soviet-style" in separate interviews with reporters.

Cooper began her testimony after a delay of about four hours.

Democratic Representative David Cicilline defended the secrecy in the process, arguing that holding the depositions in private protects the integrity of the inquiry.

"One of the reasons you do these in private is because you want to prevent witnesses from attempting to align their testimony to the testimony of another witness by watching it or reading a transcript. It's how you protect the integrity of any investigation," Cicilline said.

Democratic Representative Eric Swalwell echoed the same stance, blasting the move by Republicans as an attempt to hinder the impeachment by scaring off the witnesses.

Democrats are investigating to see whether there are grounds to impeach Trump over a phone conversation he had on July 25 with Ukrainian President Volodymyr Zelenskiy, where he asked him to investigate former Vice President Joe Biden, the 2020 Democratic frontrunner, and his son for corruption.

The content of the phone call was leaked by an unidentified whistleblower who is said to be a member of a US intelligence agency.

Republicans sent a letter to House Intelligence Committee Chairman Adam Schiff on Wednesday, asking him to arrange for the whistleblower to testify publicly. They accused Schiff of blocking Republican-led committees from listening what the whistleblower had to say.

Schiff told reporters that the witnesses testifying in the inquiry have are fighting off White House efforts to keep them silent.

"The president has urged his acolytes in Congress to use other means to try to prevent their testimony. But they won't be successful," he said.

Trump on Monday called on Republicans “to get tougher and fight" the impeachment, saying the Democrats were "vicious and they stick together."

He also slammed his critics within the Republican Party and called them “human scum.”

"The Never Trumper Republicans, though on respirators with not many left, are in certain ways worse and more dangerous for our Country than the Do Nothing Democrats. Watch out for them, they are human scum!"

Trump has denounced the impeachment inquiry as “lynching.”