TEHRAN, oct 24_Beijing has lashed out at the United States for “weaponizing” its visa system after Chinese space officials and experts missed attendance at a major international space conference being held in Washington. 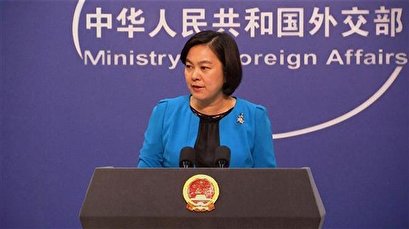 TEHRAN, Young Journalists Club(YJC)_Speaking at a news conference in the capital on Wednesday, China’s Foreign Ministry spokeswoman Hua Chunying said the Chinese delegation is absent from the ongoing International Astronautical Congress in Washington because the American authorities failed to grant visas in time.

Hua said her country had applied for the visas in July, and the delegation from the China National Space Administration went for visa interviews at the US embassy more than a week before the conference.

“But the head of the delegation had not received a US visa even after the conference started,” said Hua, adding that several other senior Chinese delegates had also failed to receive visas.

“And as a result, the Chinese delegation was unable to attend the opening ceremony [and] plenary discussions, and take part in other important events,” the spokeswoman noted.

Hua said the US failure to approve visas in time for the event was the “tip of the iceberg," and went on to blame Washington for using its immigration system to disrupt global communications and collaboration.

Hua told the news conference that “for some time, the US has frequently rejected and delayed visa applications, revoked long-term visas of Chinese applicants, investigated and harassed the Chinese scholars, students, business people, and scientific and technical personnel.”

The Chinese spokeswoman stressed that the US has “weaponized” visa issuances and “repeatedly defied international responsibilities and obligations and impeded normal international exchanges and cooperation.”

The US embassy reportedly declined to comment on the issue, claiming that it was unable to discuss individual visa cases as they were confidential under US law.

This year’s event in Washington is the 70th International Astronautical Congress and brings together scientists from around the world to discuss their work.

China has become an increasingly active player at the event in recent years as its space program has expanded in scale and ambition. Beijing is pouring billions into its military-run space program, with hopes of having a crewed space station by 2022 and of sending humans to the Moon in the near future.

China, once having hosted the international congress in 2013, is also planning to build a base on the far side of the moon.

The visa incident comes against a backdrop of a bitter trade dispute between China and the US, in which accusations that China steals or coerces foreign companies into handing over sensitive technology have played a major role.

The two countries are also in deep disagreement in many other areas, including human rights, the disputed South China Sea and Chinese-claimed Taiwan.