TEHRAN, oct 24_A senior leader of the Palestinian Hamas resistance movement has warned that the Israeli regime is implementing “three dangerous plans” for the al-Aqsa Mosque compound in the occupied Old City of East Jerusalem, al-Quds, saying the besieged Gaza Strip will defend the holy complex by any means necessary. 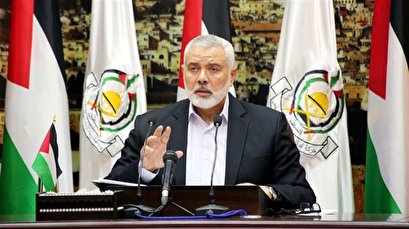 TEHRAN, Young Journalists Club(YJC)_Ismail Haniyeh, Hamas Political Bureau Chief, made the remarks during a speech he delivered at a session of the Palestinian Legislative Council (PLC) in the Gaza Strip on Wednesday, the Palestine Information Center reported.

Hanyieh said that the first stage of the plot by the occupying regime is allowing the Israeli settlers to publicly perform Jewish rituals, which are banned in accordance with a 1967 agreement. He further added that Tel Aviv is attempting to transform the idea of tolerated non-Muslim worship into an indispensable religious right granted to the settlers.

According to an agreement signed between Israel and the Jordanian government after Israel’s occupation of East Jerusalem, al-Quds, in 1967, non-Muslim worship at the compound is prohibited.

As for the second part of the plot, Haniyeh said that the Israeli regime is increasingly undermining the role of the guards at the Al-Aqsa Mosque by keeping them as far away from the complex as it can so that the settlers can freely hold guided tours there. He noted that the guards have been playing a significant role in defending the mosque from such violations.

The top resistance official also warned of the third plot, which is changing the character of the Israeli-restricted Bab al-Rahma area of the complex. Haniyeh said that today we see Israeli settlers are allowed to enter the site but Muslims are banned from entering and saying their prayers inside the site.

Bab al-Rahma, with a gate of the same name, consists of a large building and a courtyard that is located to the east of the al-Aqsa Mosque compound.

Haniyeh also called on all Palestinians, both in the blockaded Gaza Strip and the occupied West Bank, to defend the al-Aqsa Mosque, stressing that “Gaza will not hesitate to support Al-Aqsa.”

He also noted that although that the coastal enclave is under tight Israeli siege, struggling with its own domestic problems and concerns, it definitely does what it can do to defend the holy complex and foil the Zionists’ plots.

“I am fully responsible for what I say — the plans to divide the al-Aqsa Mosque will fail, and we will never allow the occupation to implement its plots and change the character of Jerusalem even if we sacrifice ourselves,” he said at the time.

The al-Aqsa Mosque compound is a flashpoint, highly respected by Muslims, Jews, and Christians alike. The mosque is Islam’s third holiest site after Masjid al-Haram in Mecca and Masjid al-Nabawi in Medina.