TEHRAN, oct 25_Iraqi Prime Minister Adil Abdul-Mahdi has reaffirmed people's right to protest but warned against violence as thousands of people across the country prepare to partake in massive anti-government demonstrations planned for Friday. 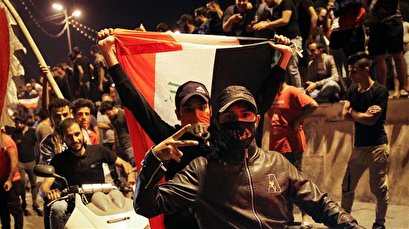 TEHRAN, Young Journalists Club(YJC)_Addressing the nation on Thursday night, Abdul-Mahdi said people had the right to call for the government to resign.

However, a collapse of the government, as some protesters have suggested, won't help improve the situation in the Arab country.

"The resignation of the government today without a constitutional alternative will lead the country into chaos," he said.

The remarks came as hundreds of people gathered in Baghdad's iconic Tahrir (Liberation) Square holding Iraqi flag as they called for the country's entrenched political class to be "uprooted."

Some of the protesters headed towards the high-security Green Zone, which hosts government offices and foreign diplomatic mission. They were pushed back by security forces using water cannons.

Similar rallies were also held in the southern cities of Diwaniyah and Nasiriyah, where the protesters said they won't go back home "until the regime falls."

Abdul-Mahdi tried to address the protesters' demands by repeating a set of reforms he pledged earlier this month, when the first wave of the protests rocked the country.

Creating more job opportunities for unemployed youth, reshuffling the cabinet and establishing a new court to try corrupt officials were some of those promises.

''We will conduct a ministerial reshuffle next week," he said.

He also promised to gradually cut in half the salaries of himself and other key positions such as the president, lawmakers and other officials.

He also said that armed groups which had representatives inside Iraq's parliament should soon lay down weapons and turn to political groups.

''We will have the immediate application for parties law in text and spirit to prevent armed groups having representatives. The armed groups which were formed in the elapsed period under various reasons have to lay down their weapon and divert into a political party,'" Abdul-Mahdi added.

Abdul-Mahdi has struggled to address discontent since the violent unrest erupted in Baghdad earlier this month and spread to southern cities.

A government committee established by Abdul-Mahdi reported on Monday that 149 civilians were killed in the first round of the protests due to the use of excessive force and live bullets by security officers.

The new wave of the protests are expected to attract large numbers of people after an endorsement by cleric Muqtada al-Sadr, whose coalition won the largest number of seats in Iraq's parliamentary elections last year.

Iraq’s most prominent Shia cleric Grand Ayatollah Ali al-Sistani has also called on Baghdad to probe the deaths in the previous round of unrest and address people's demands.