TEHRAN, oct 25_North Korea has proposed that Seoul discuss the removal of its facilities from the North's resort of Mount Kumgang, a key symbol of cooperation that Pyongyang recently criticized as "shabby" and "capitalist," the South's officials said on Friday. 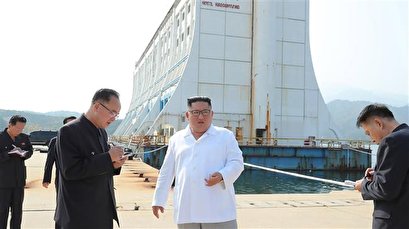 TEHRAN, Young Journalists Club(YJC)_In the latest sign of the neighbors' cooling ties, North Korean leader Kim Jong-un has urged that the South's "backward" and "hotchpotch" facilities at the infrequently used resort be taken down and rebuilt, the North's KCNA news agency has said.

On Friday, North Korea sent notices to the South's Unification Ministry, which handles issues between the two sides, and Hyundai Group, whose affiliate Hyundai Asan Corp built resort facilities, asking for the demolition and seeking discussion through the exchange of documents, the ministry said.

"The government will prepare a creative solution to the Mt. Kumgang tourism project" by protecting the property rights of South Korean people while considering the international situation, inter-Korean agreements and domestic consensus, Unification Ministry spokesman Lee Sang-min said in a briefing.

Any withdrawal of South Korean relics from the scenic resort would be another setback for President Moon Jae-in's campaign to end confrontation between the old foes, including efforts to
resume stalled business initiatives.

"The North asking the South to discuss the issue 'in writing' means they don't even want to talk about other things," said Cheong Seong-chang, a senior fellow at South Korea's Sejong Institute.

Mt Kumgang is on North Korea's eastern coast, just beyond the demilitarized zone separating the two countries. It was one of two major inter-Korean economic projects, along with the Kaesong industrial zone, and an important token of rapprochement during decades of hostilities following the 1950-53 Korean War.

Kim, on a visit to a nearby province, hailed a new tourist resort being built there as a striking contrast to Mt Kumgang's "architecture of capitalist businesses targeting profit-making from roughly built buildings," KCNA said.

However, the South's Unification Minister Kim Yeon-chul said he did not see the North's proposal as a bid to exclude the South, because Kim Jong Un had said he would welcome South Koreans if it was properly rebuilt, the Yonhap news agency said.

Tourism has become increasingly key to Kim's policy of "self-reliant" economic growth, as it is not directly subject to UN sanctions aimed at curbing the North's nuclear programs, though they ban the transfer of bulk cash to Pyongyang.

There have been no South Korean tours to Mt Kumgang since 2008, although there have been infrequent events such as the reunions of families from both sides separated by the war.

Kim has called for Mt. Kumgang to be refurbished in "our own style" alongside other tourist zones, such as the Wonsan-Kalma coastal area and the Masikryong ski resort.

The Wonsan beach resort, one of Kim's pet projects, is seen nearing completion by early 2020 after "remarkable construction progress" since April, 38 North, a U.S.-based project that studies North Korea, said in a report, citing satellite imagery.