TEHRAN, oct 26-Thousands of demonstrators peacefully marched in the streets of Barcelona on Friday night calling for independence, the release of Catalan separatist leaders from prison, and an end to police action on demonstrators. 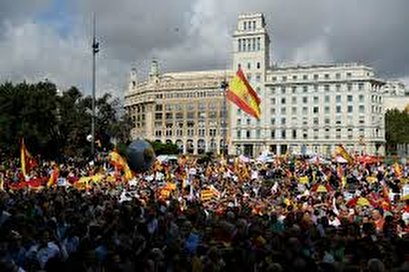 TEHRAN, Young Journalists Club(YJC)_Catalonia has been caught in a spiral of protests, some of them violent, since nine separatist leaders were charged with sedition and convicted on October 14 to prison sentences of up to 13 years over their failed 2017 independence bid.

Some of the protests last week ended in riots in Barcelona, the worst street violence Spain had seen in decades, when demonstrators battled police, torched cars and set up burning barricades, introducing a darker element to a previously largely peaceful separatist movement.

Catalonia's failed banned referendum and short-lived declaration of independence in 2017 set off Spain's worst political crisis since the country's return to democracy and is a major issue in the upcoming November 10 general election.