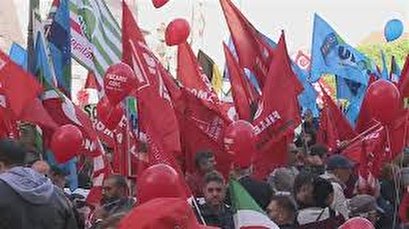 Also nurses and doctors in hospitals and workers in public schools joined the strike action.

Base unions demand a significant raise in wages, better working conditions and the scrapping of labor and pension reforms introduced by previous governments.

Rome has been hit hardest by strikes and protests. A large group of workers and citizens gathered here, in Piazza del Campidoglio, where the mayor's office is located. The rally is aimed at protesting the way companies like public transport agency ATAC and waste collector AMA are managed.

The strike against Rome's municipality was called by Italy's major trade unions CGIL, CISL and UIL.

The mayor of Rome Virginia Raggi had unsuccessfully appealed for the strike to be called off earlier this week. Raggi argued citizens were tired of unjustified strikes.

Streets were gridlocked in Rome following public workers' simultaneous strikes. The city's underground lines were also halted as were many bus services causing uproar among citizens.