Defense Ministry: Russia has no reliable information on operation against Baghdadi

TEHRAN, oct 28_Moscow says has no reliable information on a special operations raid carried out by the United States military, which killed Abu Bakr al-Baghdadi, the leader of the Daesh Takfiri terrorist group, raising doubt about what US President Donald Trump had earlier announced. 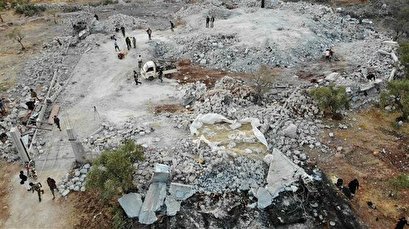 TEHRAN, Young Journalists Club(YJC)_Major General Igor Konashenkov, an official at the Russian Defense Ministry, was quoted by RIA news agency as saying on Sunday that the ministry “does not have reliable information about the actions of the US army in the Idlib 'de-escalation' zone... concerning the 'umpteenth death'” of Daesh leader.

He also added that the ministry was not aware of any assistance that Russia had allegedly given the US forces in the operation, thus challenging Trump's remarks about the US military having coordinated the operation with Russia

During his announcement of Baghdad's death, Trump thanked Russia, Turkey, Iraq and Syria as well as Syrian Kurds for helping with the operation, claiming that Moscow “did not know the nature” of the mission, but was informed ahead that it was going to happen

“We are unaware of any alleged assistance to the flying of US aviation into the airspace of the Idlib de-escalation zone during this operation,” the Russian Defense Ministry official said.

The Idlib operation was conducted only a few weeks after Trump announced that the US would be withdrawing its forces from northeastern Syria, clearing the path for an expected Turkish incursion into the region

Turkey launched the offensive on October 9 with the aim of purging the northeastern Syrian regions near its border of US-backed Kurdish militants, whom it views as terrorists linked to local autonomy-seeking militants of the Kurdistan Workers’ Party (PKK)

Trump, later however, rowed back on the withdrawal decision, announcing that a contingent of US Special Forces would remain in Syria to control its oil fields.