TEHRAN, oct 29_Ankara says Kurdish militants of the so-called People’s Protection Units (YPG) have yet to fully pull out of border areas in Syria’s north as a deadline set by a recent Turkey-Russia deal for their withdrawal approaches. 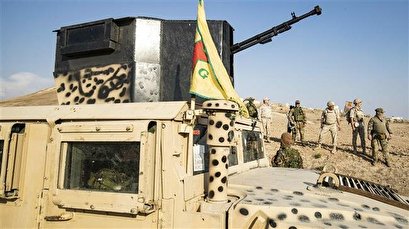 TEHRAN, Young Journalists Club(YJC)_On October 22, Russian President Vladimir Putin and his Turkish counterpart, Recep Tayyip Erdogan, signed a memorandum of understanding in the Black Sea resort city of Sochi, where they asserted that all YPG militants must withdraw from the “safe zone” in northeastern Syria to a depth of 30 kilometers from the Turkish border within 150 hours.

Following the deadline, which will expire at 6:00 p.m. local time (1500) GMT today, Ankara and Moscow will run joint patrols around the area.

“It looks like the YPG terror organization is still in the area of Operation Peace Spring,” Turkish Defense Minister Hulusi Akar told the Sabah newspaper in an interview on Tuesday.

Akar said there were still around 1,000 YPG militants in the border town of Manbij and a further 1,000 in nearby Tel Rifat.

“This fight (against terrorism) is not over. We are aware that it will not end,” he said.

Asked about the joint patrols planned with Russian forces in the border area, Akar said, “The rules of engagement, which vehicles are to be used, the authorities and directives are to be determined.”

A Russian delegation is currently in Turkey to discuss joint patrols and wider security situation in northeast Syria.

Erdogan said on Saturday that Turkey would act alone to clear northeast Syria of YPG militants if Russia failed to fulfill its obligations under the Sochi accord.

Ankara regards the US-backed YPG as a terrorist organization tied to the homegrown Kurdistan Workers’ Party (PKK) militant group, which has been seeking an autonomous Kurdish region in Turkey since 1984.