TEHRAN, oct 31_Nobel Peace Prize winner and Izadi activist Nadia Murad says the alleged death of Daesh chief Abu Bakr al-Baghdadi in a US raid over the weekend is not enough to compensate the victims of the atrocities committed by the Takfiri terrorist group. 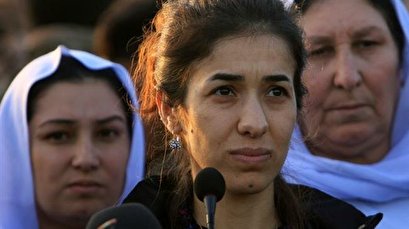 TEHRAN, Young Journalists Club(YJC)_Murad, a survivor of sexual slavery at the hands of Daesh, told reporters at the United Nations on Wednesday Nobel Peace Prize winner and Izadi activist Nadia Muradthe death of Daesh leader Baghdadi is not enough to compensate for the atrocities committed by the Takfiri terrorist group in the regiony that the ongoing efforts to secure justice for victims of Daesh terrorists should not end with the death of Baghdadi.

“We don’t want to just see ISIS [members] like Baghdadi just get killed, we want to see justice,” she said, using an acronym for the Takfiri terrorist outfit.

The US claimed on Sunday that Baghdadi killed himself by detonating an explosive vest after fleeing into a dead-end tunnel during an alleged raid by US forces in northwest Syria.

Murad, who won the 2018 Nobel Peace Prize for her efforts to end the use of sexual violence as a weapon of war, is an Iraqi Izadi woman who was enslaved and raped by Daesh terrorists in Iraq’s northern city of Mosul, in 2014 before managing to escape. Daesh terrorists also butchered her mother, six brothers and other relatives.

Murad said she had spoken to several Izadi survivors about Baghdadi’s death. Their response, she said, was “Okay, but this is just Baghdadi. What about all these ISIS (terrorists)?”

Murad warned that there were “thousands” of terrorists ready to do what Baghdadi did “and they are not giving up.”