TEHRAN, oct 31_Syria has called on the Kurdish-led Syrian Democratic Forces (SDF) to join the ranks of the national armed forces and help defend the country against the Turkish aggression. 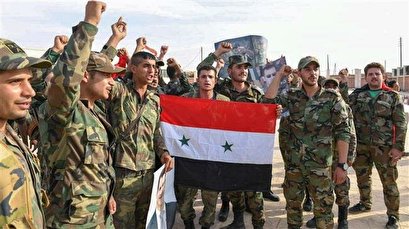 TEHRAN, Young Journalists Club(YJC)_In a statement released on Wednesday, the Syrian Defense Ministry expressed its readiness to accept the SDF militants willing to unite with the Syrian military against “a common enemy.”

The Army and the Armed Forces General Command are “ready to receive the members and the units who are willing to join it from these groups and to settle the status of those who haven’t joint the compulsory, the reserve military service and the wanted,” read the statement.

“We in Syria are facing a common enemy, and we must sacrifice as the people of unified Syria — [including] Arabs and Kurds — to restore every inch of the beloved Syrian territories,” it added.

Earlier this month, Washington shocked the world by abruptly abandoning its longtime Kurdish allies in northeastern Syrian and announcing a troop pullout in the face of a Turkish offensive against the Kurds.

Feeling betrayed by the US, the Kurdish militants turned to Damascus for help, inking a Russia-brokered deal with the Syrian government, under which the Kurds allowed army troops to deploy along the Turkish border to stave off Ankara’s aggression.

A 10-point memorandum of understanding between Turkey and Russia put an end to the Syria incursion, but Ankara has kept threatening to resume the operation if the terms of the deal are not honored.

Separately on Wednesday, the Syrian Interior Ministry offered to integrate the Asayish forces, the security arm of the SDF, into the government’s internal security agency.

It further announced its preparedness to provide civil services for all the locals in Syria’s northeastern al-Jazeera region after the restoration of government control over large parts of the area.

Meanwhile, the Syrian Education Ministry stressed that it was ready to handle the educational status of the students in al-Jazeera region who have been deprived of schooling due to terrorist operations.

However, SDF head Mazloum Abdi said the ministry should, instead, work to find a way to preserve the SDF’s “exclusivity” in the areas where it is present.

“The form and approach of the Syrian Ministry of Defense’s statement and its call for members of our forces to ‘engage individually’ to the Syrian army is not welcome,” he tweeted. “Rather, the ministry should offer a solution in light of what we have proposed, which is to preserve the SDF's exclusivity in its areas of presence in order to be part of the Syrian defense system.”